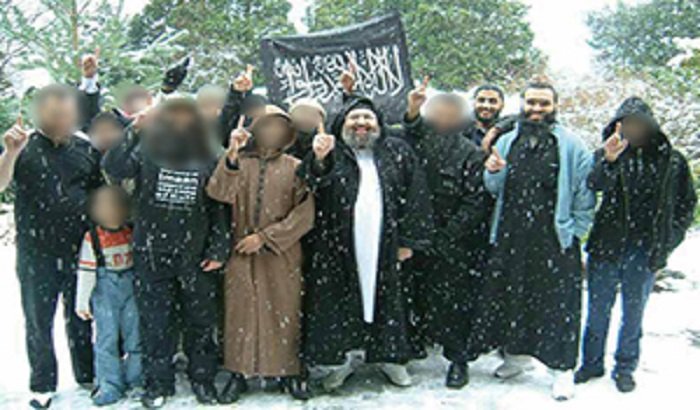 Three men who organised and delivered terrorist speeches in Luton last year have been convicted for their respective roles at the Old Bailey.

Their conviction follows an intelligence-led operation by Bedfordshire Police and the Metropolitan Police Counter Terrorism Command, which identified the men were avid supporters of Daesh.

Yousaf Bashir, 36, from Luton, was found guilty of one count of addressing a meeting to encourage support for a proscribed organisation.

Mohammed Istiak Alamgir, 37, from Luton, was found guilty of three counts of addressing a meeting to encourage support for a proscribed organisation.

[Image: Khan (in black) and Alamigir (in blue cardigan) with Omar Bakri Muhammed]

Bedfordshire Police launched an investigation into the activities of proscribed terrorist organisation Al-Muhajiroun (ALM) and using a range of tactics, officers gathered evidence and intelligence which they shared with the Met Police last year.

The evidence included the fact that Bashir, Khan and Alamgir had attended meetings at a church in Luton and a marquee in an associate's back garden.

At the meetings, the men delivered incendiary speeches to around 50 to 70 people at a time, including children. The group praised Daesh and encouraged others to support the proscribed organisation, including by travelling to Syria to fight alongside them.

Among those listening to their speeches were Shazib and Junead Khan - subsequently arrested by the Met Police. Junead Khan is now serving a life sentence for plotting to kill a US soldier in the UK; Shazib Khan is serving 13 years' imprisonment for plans to fight alongside Daesh in Syria.

The group's advocacy of terrorism was also evident outside the meetings. Rajib Khan celebrated when terrorists killed staff at the Charlie Hebdo offices in Paris and Alamgir collected money at the talks, to pay the legal fees of convicted terrorist Omar Bakri Muhammed, seen as the head of ALM.

Officers from Bedfordshire Police and the Met Police Counter Terrorism Command swooped on the men at their home addresses in December 2015.

They seized over 1,500 exhibits, including more than 270 digital devices.

From these, they recovered over 500 images and videos, including:

A date for sentencing is to be set.

Commander Dean Haydon, head of the Met Police Counter Terrorism Command, said: "These men were closely associated with Al-Muhajiroun, a dangerous group which has inspired and influenced numerous terrorists."

"The men used meetings about Ramadan - a time for self-reflection and change for the better - to instead deliver subversive speeches that encouraged groups, including very young children, to engage in war alongside Daesh."

"Speeches like theirs inspire the terrorists of tomorrow and I am immensely pleased with the excellent work of my officers and Bedfordshire Police, which ensured the conviction of these men."

"Crucially, Bedfordshire Police and the Met are working with Luton Social Services to safeguard the vulnerable children we've identified were taken to the radical meetings."

Assistant Chief Constable Jeff Hill from the Eastern Counter Terrorism Intelligence Unit, said: "Luton is a fantastic town with great diversity and strong communities, however we are aware there are elements with extreme views who prey on the vulnerable."

"This was a complex investigation which was launched to target those who seek to influence others with their poisonous rhetoric. We used a range of tactics to collect evidence in order to bring these men to justice."

"We simply will not tolerate those who spread fear and hate in our communities and will continue to target, arrest and disrupt those with extreme views."