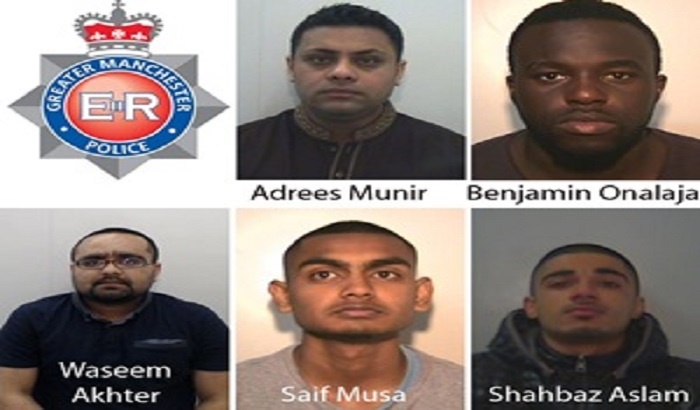 The final man of 10 sentenced for a large scale fraud was given a community order at Manchester Crown Court, Crown Square.

Abdul Khalid of Copthorne Crescent, Manchester was found guilty of conspiracy to defraud and given a 12 month community order and a £250 fine as well as being ordered to carry out 140 hours of community service and complete a decision making and thinking course.

Nine other men were sentenced at earlier hearings.

On Monday 27 June 2016 seven out of the ten men were sentenced at Manchester Crown Court, Crown Square.

Abiodun Ayodeji Odujinrin of Ackworth Drive, Manchester, was given a six months suspended sentence and ordered to 180 hours of unpaid work for conspiracy to defraud.

Benjamin Onalaja of Allen Roberts Close, Manchester, was jailed for one year and 10 months for conspiracy to defraud.

Saif Musa of Stonepail Close, Cheadle, was jailed for three years and nine months for conspiracy to defraud.

Shiabul Hoque of Holmfirth Street, Longsight, was given a two year suspended sentence and ordered to 250 hours unpaid work for conspiracy to defraud.

Adrees Munir of Birchall Lane, Longsight, was jailed for one year and 10 months for conspiracy to defraud plus six additional months for breach of a previous order.

Aminoor Rahman of Craston Road, Longsight, was given a nine month suspended sentence for conspiracy to defraud.

Ahmed Shah Sadat of Victoria Terrace, Manchester, was given a community order for 12 months and ordered to 140 hours unpaid work for conspiracy to defraud.

Waseem Akhter of Sandringham Street, Levenshulme, was jailed for two years and six months; one year and six months for conspiracy to defraud and one year for money laundering for a separate matter.

Shahbaz Aslam of Clitheroe Road, Longsight, was jailed for four years for conspiracy to defraud.

Officers from GMP’s Fraud Investigation Team received a series of reports of telephone frauds in 2013 across the Greater Manchester area with a total value of more than £66,000 taken from 91 victims.

From April 2013 to April 2014 these ten men worked as a team, targeting elderly victims by calling them at their home address, telling them that they were a police officer or bank official.

The victim would be told to finish the call and immediately contact their bank, but as the offender(s) did not clear the telephone line, the victim unknowingly spoke to the same caller(s) again. The victim would then be convinced to pass on their bank details, including mother’s maiden name and PIN number, and told that police needed to seize the original bank card for evidence, which the victim still had in their possession.

An unsuspecting taxi driver would often be booked by the group to collect the victim’s card and return it to the caller who would then use it at an ATM machine to remove cash from the account, as well as using the card in shops.

While officers from GMP’s Fraud Investigation Team were reviewing CCTV footage on Tuesday 11 June 2013 at a Travel Money Exchange counter in Debenhams, Manchester City Centre trying to identify the group, a security guard noticed that one of the men, Benjamin Onalaja, had walked into the store.

Officers arrested Onalaja on suspicion of conspiracy to defraud while he waited in the queue at the exchange counter. This led to the arrests of the nine other men who have since been sentenced, the final man being Khalid.

Detective Chief Inspector Danny Inglis of GMP’s Economic Crime Unit, said: “The final of the 10 men, who began a campaign of extortion and ruthlessly targeted vulnerable and elderly people, has been sentenced and four of those already convicted have been sentenced to over 10 years in prison.

“Some of them are now safely behind bars but all will be unable to carry on conning elderly people of their savings.

“Scammers are becoming more sophisticated so never provide your bank details to anyone over the phone or transfer money to someone you do not know or do not trust.

“A police officer or bank would never call you and ask you to do something like this and would never use a taxi to pick anything up from you. Thankfully people are becoming wise to these scams and often put the phone down as soon as they hear the offender’s spiel but if you receive a suspicious call, hang up immediately and report it to Action Fraud on 0300 123 2040.”