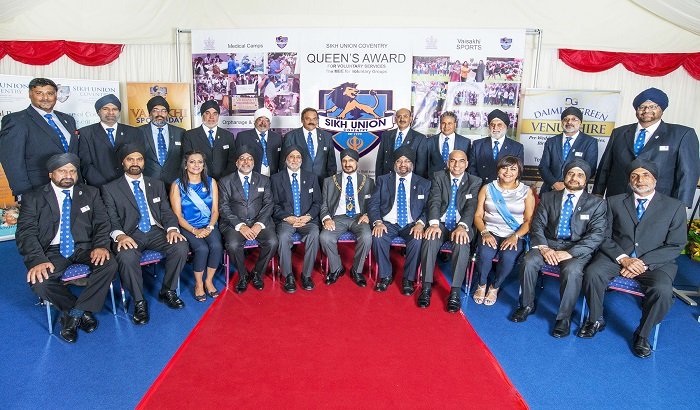 Sikh Union who are based at Daimler Green Community Centre in Coventry,were awarded the prestigious Queen’s Award for Voluntary Service for outstanding work in their communities and is said to be the equivalent to an MBE.

The award, a limited edition crystal gift was presented by The Queen’s Representative, Deputy Lieutenant Mr Simon Topman to the Chairman Mr Palvinder Singh Chana and the certificate was presented to the Secretary Harbans Singh Gumman.

To mark this special occasion, Harbans Singh Gumman presented Mr Palvinder Singh Chana with a chairman’s office chain to honour his hard work and efforts in leading the group over fourteen years in his position as chairman. This is a first in the Sikh Union’s history which has been running for forty-six years not only as a hockey club, but as a registered charity helping to make a difference locally in Coventry, nationally around the UK and internationally across the Globe. Sikh Union provides activities for the local community in Coventry at the Daimler Green Community Centre.

The Lord Mayor of Coventry who was invited to the event said, “I am not just really pleased to be here but honoured to be here, because when I actually researched into the work Sikh union does, I was amazed at the amount of things they do, not just for the people in United Kingdom but also for people worldwide, it’s just incredible.”

George Duggins, Leader of the Coventry City Council "I am proud of the Sikh Union's achievement and proud of the work they do on behalf of Coventry. I look forward to building an even stronger relationship with them."

Colleen Fletcher, MP for Coventry North East commented, “I thought it was absolutely wonderful today, many great speakers who wanted to come and celebrate tonight I also wanted to do the same. I am proud of Coventry Sikh Union getting this very prestigious award from the Queen. In Coventry North East it is very multicultural and we work together and that is down to people in Sikh Union doing so much work and bringing people together and raising money for various charities in Coventry and abroad”