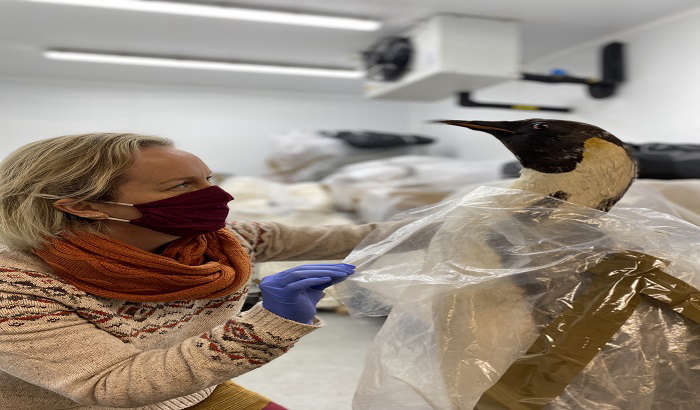 A museum’s magnificent stuffed penguin will spend the next two weeks chilling out in a giant, state-of-the-art freezer as curators give damaging bugs and beetles the cold shoulder.

The impressive emperor penguin has been put on ice at Leeds Discovery Centre after experts there detected potentially problematic pests which can destroy delicate taxidermy specimens.

Over the next fortnight, the high-tech freezer will keep the eye-catching Antarctic bird at -30 degrees Celsius, killing off any bugs and ensuring the penguin can stay in tip-top condition as part of the museum’s collection.

Clare Brown, Leeds Museums and Galleries curator of natural sciences, said: “We keep a close eye on all our taxidermy specimens because bugs, moths and pests can cause serious problems and also have the potential to spread to other parts of the collection, so we have to try and stay ahead of them.

“Fortunately, the facilities we have at the Leeds Discovery Centre mean we’re able to quickly get any at risk specimens into the freezer and down to sub-zero temperatures before pests have a chance to do any major damage. This will also kill off any eggs they may have left behind too.

“Our penguin has always been bit of a fixture in the collection and it’s one of the first things we see when we head into the museums store. After a bit of care and attention, we’re looking forward to getting it back in its usual spot so it can carry on giving us a warm welcome every day.”

The penguin is thought to be around a century old and originally became part of the Leeds collection in the 1980s, when it made the trip across the Pennines from Salford Museum and Art Gallery.

In nature, the emperor penguin, Latin name Aptenodytes forsteri, is the tallest and heaviest of all living penguin species and the only one which breeds in the harsh conditions of the Antarctic.

Living in colonies of several thousand birds, they are thought to survive for up to 50 years old in the wild.

As well as the emperor penguin, the Leeds Discovery Centre is also home to an Adélie penguin egg collected by famed explorer Ernest Shackleton during one of his historic expeditions to the Antarctic.

Used as a store for parts of the Leeds collection which are not on display, the centre is home to more than a million objects spanning tens of millions of years of world history.

Councillor Jonathan Pryor, Leeds City Council’s executive member for economy, culture and education, said: “The Leeds Museums and Galleries team does an incredible job of caring for a huge collection of objects, each telling a different part of the story of not only Leeds, but the entire world around us.

“It’s always fascinating to learn more about the unusual and wonderful things going on behind the scenes to protect and preserve the remarkable collection.”