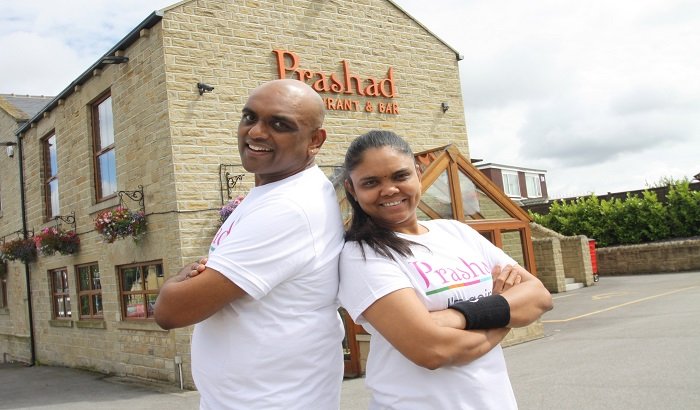 A restaurant owner from Drighlington has raised £2,000 for Yorkshire Cancer Research after taking part in the Run for All Leeds 10K.

Bobby Patel, owner of the award-winning Indian restaurant Prashad, decided to take part in the event after his dad, Mohan, was diagnosed with Non-Hodgkin lymphoma. Mohan received the all-clear earlier this year after undergoing treatment at Bradford Royal Infirmary.

Bobby’s wife Minal, Head Chef at Prashad, has now been inspired to take up running herself and the couple will take part in the Bradford 5K together on October 30. Bobby has also signed up for the Great North Run, a half marathon from Newcastle to South Shields.

Bobby and the team at Prashad, which featured on Ramsay’s Best Restaurant in 2010 and is the only Indian Restaurant in Yorkshire to hold two AA Rosettes, are working with Yorkshire Cancer Research to raise awareness of the disease among Asian communities in the Bradford area.

Bobby said: “It was amazing to take part in the Leeds 10K with thousands of other runners raising money for lots of different charities. The atmosphere was so warm and the cheers from the crowd gave me that extra push. I haven’t found that nirvana of running. It’s still hard every time I go out, but crossing the finish line felt incredible.

“We’re really grateful to our friends, family and customers for all the support they gave us in the run up to the day. Taking part in the event gave us something really positive to talk about in the restaurant and we hope that it will inspire other members of the Asian community to take up healthy past times such as walking and running.”

Minal, who works 80 hours a week, said: “The whole family went to watch Bobby and it was so emotional to see him running for the first time. I’m not a sporty person but I’ve found that running gives me so much more energy. I’m always so busy and tired but you have to make the time to exercise. I’m so excited to have a challenge to aim for.”

Bobby added: “Minal is always on her feet cooking or developing menus. The way she’s taken up running just shows that there’s always time for these things and I hope her example will encourage other Asian women to think about setting some time aside for exercise.

“It’s amazing for us to be able to do something together outside work and we’re really looking forward to taking part in the 5K for Yorkshire Cancer Research. Statistics around cancer, particularly in Asian communities, are really worrying, so we’re trying to raise awareness as much as possible.”