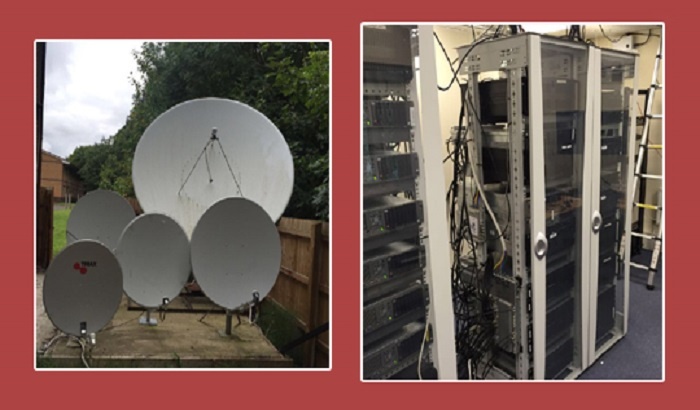 A City of London Police Intellectual Property Crime Unit (PIPCU) operation has led to the arrest of three people who are suspected to have orchestrated the distribution and transmission of thousands of illegally modified TV set-top boxes to people worldwide.

Detectives from PIPCU executed a series of dawn raids, at a business and three residential addresses in Chorley, Lancashire. Three men ages 36, 40, 58 have been arrested on suspicion of conspiracy to defraud and money laundering offences.

The operation was supported by colleagues from Lancashire Constabulary and a forensic investigator from the Federation Against Copyright Theft (FACT). So far officers have recovered approximately over 30 servers and set-top boxes which are believed to have been modified with illegal software to enable them access to hundreds of paid for subscription only channels. Some of the channels available on the devices include pay-per-view sports, the latest movies and UK broadcast television only available to UK licence fee payers. Officers have also identified 15 satellites.

The PIPCU investigation established that illegally modified devices were widely available to buy on the internet. Enquires then showed that the devices were being marketed as genuine and legitimate for use anywhere in the world, for a yearly fee of around £400.

The PIPCU led enquiry now continues with support from licensing experts and broadcasters across the globe.

“Our action today will disrupt what we understand to be a significant and highly resourced operation to distribute pirated television on an industrial scale to tens of thousands of people across the globe. Operations like this remain an integral part of protecting livelihoods supported by the entertainment industry and the law abiding public who pay for their channels with their hard earned cash.

“Furthermore If you make a purchase from a counterfeit or pirate website you put yourself at risk from identity theft. Our investigations have identified over 600 people whose personal and payment details have fallen into the wrong hands after they have made purchases on fake websites. In all cases we have informed each individual and provided them with advice on how to stay safe online.

“With a multi agency approach which is driven by intelligence sharing, we will continue to identify and disrupt copyright related criminality. We are working hard to ensure consumers are safeguarded from the threat of financial loss from rip-off deals which provide no guaranteed content and no longevity.”

“Illegally modified set-top boxes, along with infringing apps and add-ons, have created new opportunities for criminality and piracy."

“Tackling these threats and the people behind them is one of our highest priorities and therefore today’s multi-agency action is another great result for law enforcement and the creative industries."

“We will continue to work with our members and partners, such as the City of London Police, to crack down on those involved in the illegal supply of these boxes so that both the content and its creators are protected.”