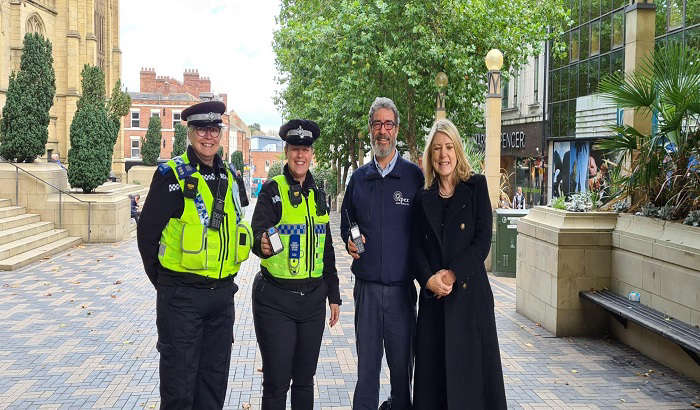 West Yorkshire Police is supporting a pilot project which will see bodycams being used by retail staff in Wakefield city centre to help address issues of verbal and physical abuse.

Wakefield BID is running the project with a number of bodycams being made available for free for the pilot by Apex Radios, who provide the talk radios already used by retail businesses in the city centre. The pilot project is due to run until the end of the year.

Sergeant Matt Jackson, of Wakefield Central Neighbourhood Policing Team, said: “Unfortunately, we have been seeing an emerging issue with retail staff, particularly security staff, reporting being repeat victims of abuse. What may start out as a shoplifting offence is escalating and turning into public order or assault offences, with a number of these also being racially-motivated.

“It is simply not acceptable for anyone to be subjected to this kind of behaviour in their workplace. We hope these bodycams will act as a deterrent but, if incidents do continue to occur, then footage captured by these cameras will assist us in building up evidence to ensure that those responsible are held accountable.

“During this pilot project, we will be working with Wakefield BID and its members to help advise where we have been seeing issues to help them in deploying the bodycams to the most effective places.”

Christine Armstrong, Director of Wakefield BID, said: “We want Wakefield to be a great place to do business and are really concerned at what we are hearing from the police and our members about the abuse that some retail staff have been subjected to.

“We already work closely with the police and this is the latest initiative to reduce anti-social and criminal behaviour in the city centre.

“The pilot project will run over the Christmas period, a busy time for the retail sector and I hope these bodycams will help prevent incidents and provide reassurance for our retail staff and shoppers alike.”