Six men have been sentenced to nearly 50 years in prison following a huge West Yorkshire Police investigation into allegations of a large-scale drug trafficking operation.

The last of the group, Richard Beech, 46, of Urmston Lane in Manchester, was jailed yesterday (Friday) at Bradford Crown Court for five years after he admitted possessing criminal property and transfer of criminal property to the value of £5m.

Over 25kg of Class A drugs with a combined street value of up to £3m, four semi-automatic pistols (with 200 rounds of ammunition), four silencers and £300,000 in cash were also seized during the investigation by the Force’s Programme Precision team.

The other five, who have already been sentenced at Bradford Crown Court under the same operation, are:

The operation was launched by Programme Precision (which sees West Yorkshire Police working together and with partners to combat serious and organised crime) and a detailed and complex investigation then followed.

Working on intelligence gathered officers stopped an Audi A3 in the Girlington area of Bradford on Thursday, 20 February this year. 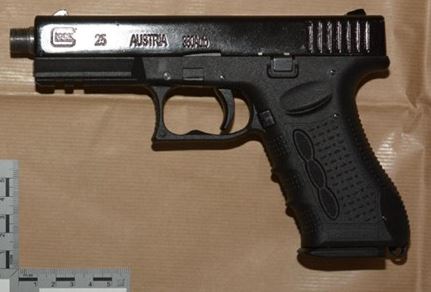 Further enquiries led the search team to another address where 11kg of cocaine and 3 kg of heroin was found. Four guns and 50 rounds of ammunition were also found.

Ashraf was seen driving his distinctive Mercedes in the Manchester Road area of Bradford. When stopped by officers he was found to have 1kg of high purity cocaine (street value of up to £80,000).

The team searched another vehicle linked to him and found another 3kg of cocaine (street value of £160,000).

The court also heard how Beech controlled the money on behalf of the group and he was stopped in his Range Rover on the M62 near Huddersfield on 29 April.

“To achieve this result took a whole team effort, with Programme Precision staff working alongside colleagues from across West Yorkshire Police to bring these offenders to justice.

“These sentences have dealt a considerable blow to serious and organised criminality in Bradford and West Yorkshire.

“This was a highly organised team of criminals trafficking significant amounts of class A drugs.

“People may have seen the likes of Ashraf flouting their ill-gotten gains thinking they were ‘untouchable’.

“What this proves is that no one is untouchable – those who involve themselves in this form of criminality can expect the Programme Precision team to take significant action against them.

“The criminals will be forever looking over their shoulder and because of the detailed investigation into this group, a significant amount of drugs have been taken off of the streets.

“Money which these criminals lined their pockets with has been confiscated and four guns (and 200 rounds of ammunition) which could have caused immense harm in our communities have been taken off the streets of West Yorkshire.”