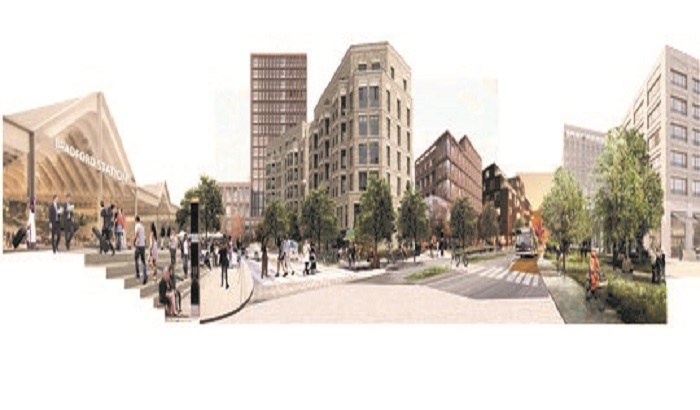 Putting Bradford on a mainline NPR route between Leeds and Manchester, with a through station, has long been regarded by the Council and partners to be key to the wider regeneration of the city and district.

It would slash journey times to 7 minutes to Leeds and 22 minutes to Manchester, connecting businesses and workforces to existing, new and emerging markets across the North and beyond. It would connect the district’s young and entrepreneurial population to the Northern labour market as well as attracting investment and creating jobs in the district. It would also support the district’s aspiration for clean, sustainable and inclusive growth and its ambition to be the UK City of Culture 2025.

A new city centre NPR station in Bradford is supported by Transport for the North, Network Rail, West Yorkshire Combined Authority, Northern Powerhouse Partnership and a host of other organisations and private sector businesses across the North.

Council Leader Cllr Susan Hinchcliffe, who is also chair of West Yorkshire Combined Authority, said: “It is disgraceful that a place the size of Bradford is still not on the mainline. We have two local stations that are not fit for purpose, or properly linked at all.

“If the Government is serious about its levelling up agenda then providing the funding for an NPR station in Bradford city centre is a no brainer. The Prime Minister said that he supported an NPR route between Leeds and Manchester back in summer 2019 but we are still waiting for that commitment to be backed up.

“Our vision of a thriving, connected Bradford District cannot happen without the Government realising the economic potential of Northern places like this. It often feels as if Bradford, the UK’s seventh largest city and one of its most diverse, doesn’t really feature when decisions are being made in Whitehall

“We understand that Government considers the underground option at the Interchange site too costly for Northern Powerhouse Rail.  So we’ve been pragmatic and looked for an alternative central Bradford site which would could be more easily connected to NPR.

“We now have a station site, on the edge of the city centre and at the heart of our Southern Gateway regeneration area, that is viable, deliverable and within our control.   We’re embarking on masterplanning work to consider how the new station will expand the commercial centre of the city and connect to the existing civil, leisure and retail core.  We are confident a new railway route and track can be identified and created – without affecting existing services and stations and with no disruption to travellers while it is constructed.

“We have a compelling case that shows Bradford city centre on a new line is the strongest of all shortlisted options from Manchester to Leeds – achieving the highest number of jobs, the most trips, the highest impact on the local economy and the greatest regeneration benefits.

“What more does the Government need to give us the green light for this transformational project?”

The six-acre St James’s Market site at Essex Street is owned by the Council and is opposite the Cineworld cinema, just a short walk from the Interchange station that it would eventually replace. It is also just off the A650 Wakefield Road and is only minutes away from the M606 link to the motorway network.

No decisions have been made about the exact route for the rail line into and out of the new station, and there are no immediate implications for traders at St James’s Wholesale Market.

However, St James wholesale market is the largest in the Yorkshire and North East region. There is potential to create a northern food hub with a new larger and more accessible modern wholesale market being centre stage, creating more jobs, strengthening local and regional food distribution as well as market access for regional food producers.

As a city, Bradford is strategically located being equidistant between London and Edinburgh and Liverpool and Hull meaning it is in an ideal location for the movement of fresh produce across the UK.

Cllr Hinchcliffe added: “We are very proud to have one of the largest wholesale markets in the North of England and are committed to that continuing in Bradford. Indeed we want to enable it to develop further and prosper and become one of the most pre-eminent wholesale markets in the country. St James’s Market is outgrowing its current location and we will work with the traders to find a new, bigger and better, site in the district when it’s needed. We would not envisage work on the station starting before 2024-25 to be open for 2030.

“Over time the Interchange rail station would close with all train and bus services moving to the new St James station.  The new station and Forster Square would be connected to each other as part of the West Yorkshire mass transit plan, integrating with the bus and road networks, as well as safe cycling and walking routes.

“This is an exciting development that I hope everyone in the district will see the advantages of and voice their support, so that the Government also backs it.”

Liz Barber, CEO of Yorkshire Water, said: “As a business that employs right across the region, we understand how labour markets work and how important it is that we have access to the right talent - but also, importantly, that they have access to us.

“Bringing together Leeds and Bradford to act as one economy, growing together and benefitting from the complementary strength of each another will be a fantastic enabler for growth in the region.”

Councillor James Lewis, leader of Leeds City Council, said: “These station plans are really exciting, not just for Bradford but for the Leeds City Region as a whole.

“Quicker journey times between Leeds and Bradford would make a real difference to people living and working in both of these great cities.

“Proposals like the new Bradford station are also a clear indication of how Northern Powerhouse Rail and HS2 could meet the demands of 21st century life and help unlock the economic potential of communities across West Yorkshire and beyond.

“Improved connectivity and capacity on our railways is vitally needed and would create thousands of new jobs – a welcome prospect as Leeds and the wider city region looks to recover from the economic impact of the COVID-19 pandemic.”

Tom Riordan, chief executive of Leeds City Council, said: “This positive proposal is a reminder of the transformative effects that can be brought about by investment in transport infrastructure.

“Northern Powerhouse Rail and HS2, along with upgrades to our existing network, would be key building blocks for a genuinely bright future for the region as a whole.

“Given Bradford’s scale, potential and growing young population, it makes absolute sense to strengthen the connections between the two city economies and reap the maximum benefits from opportunities such as Northern Powerhouse Rail.

“Major rail schemes in Leeds such as the Leeds Bradford Airport Parkway and Thorpe Park stations are already taking shape and we look forward to seeing Bradford’s plans developing in the same way.”

Roger Marsh OBE DL, Chair of the Leeds City Region Enterprise Partnership and NP11 group of northern local enterprise partnerships, said: “Bradford’s huge potential to deliver for the North and the UK as a whole will only be maximised by improvements in its transport connections opening up new opportunities for investment and job creation.

“Bradford Council’s station proposals underline the importance Northern Powerhouse Rail has to communities across the North of England and the importance of delivering this vital investment as quickly as possible.”

Cllr Kim Groves, Chair of the West Yorkshire Combined Authority Transport Committee, said: “A Bradford City Centre station on a new Northern Powerhouse Rail line connecting Leeds to Manchester is an essential element of our ambitious plans for transport in West Yorkshire and we will be working with Bradford Council as more detailed proposals for the station location are developed.

“We hope the Integrated Rail Plan for the North and Midlands will confirm the Government’s support for a new line in addition to the delivery in full of the Transpennine line upgrade, HS2 East and a programme of electrification of existing lines.”