Police have pledged more action is on the way to target Huddersfield burglars after making a string of arrests and increasing night time patrols in the town.

The Huddersfield Neighbourhood Policing Team is urging residents to keep reporting suspicious activity on their streets as enquiries continue into recent commercial and household burglaries in September.

Officers from Kirklees CID, Huddersfield NPT and the Huddersfield Town Centre Teams have been investigating a small spike in offences targeting homes in the Birchencliffe, Oakes and Marsh areas and businesses in the town centre and Marsh. 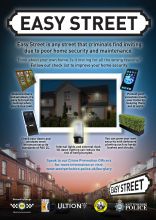 Enquiries have led officers to identify and arrest three local Huddersfield males aged 29, 31 and 32 for the house offences and a further two local males aged 37 and 47 for the business offences, in the last few days.

A 38-year-old Huddersfield woman has also recently been arrested for theft from vehicle offences in the town centre.

Work is also ongoing with the Kirklees Rural NPT to target offenders who may be moving around the Kirklees District.

Inspector Graham Dyson of the Huddersfield NPT, said, “This was a concerning trend that was starting to develop, however the great work by Detectives, NPT and town centre officers has resulted in a number of swift arrests.
“My officers and Kirklees CID are continuing to make enquiries into these and other offences including with colleagues in other NPT areas.
“The NPT has also stepped up visible night time patrols in affected areas to reassure residents, provide a visible deterrent, and assist in the drop we have seen in offending in the last few days.”

He added: “Burglary is an offence that really affects home and business owners, not just with loss of valuables and revenue for business, but also the turmoil this causes to those affected.
“Our approach is always to ensure we gather as much evidence as possible, and quickly identify those involved to ensure we prevent further offences and therefore other people becoming victims.
“Please can I ask that everyone reviews their home and business security to ensure that your premises are as secure as possible.
“I would also like to encourage people to report any suspicious activity. I would much prefer to have officers attending a report that turns out to be an innocent incident rather than subsequently receiving reports of offences in an area.”

Suspicious activity can be reported via 101 or online at www.westyorkshire.police.uk/101livechat However, if it is suspected a crime is in progress then dial 999.

Information can also be provided anonymously via the independent Crimestoppers charity on 0800 555 111.