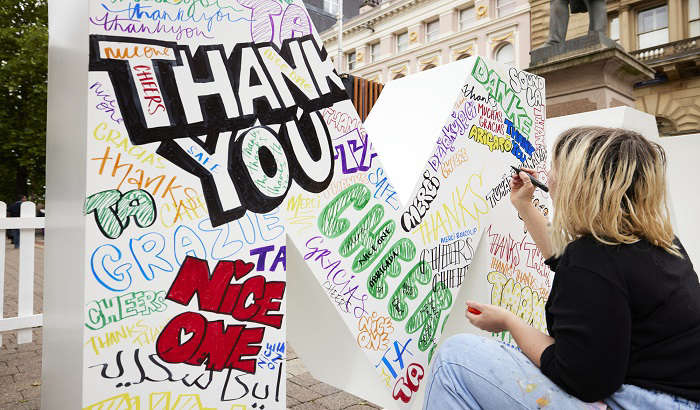 Mancunians were queuing up today to add their own thanks to a special Manchester Love Letters wall, as the city said 'thank-you' in true Manchester style with a free festival of fun for all.

The 'Thank You Manchester' weekender took over the city centre for two days to help bring laughter back to the city's streets and squares, and to help the city say a big thank you to all those who helped it get through the last 18 months.

The day began with an invitation for people to come together and pause during a minute's silence on St Ann's Square, led by Reverend Canon Nigel Ashworth and the Lord Mayor of Manchester Tommy Judge, to remember and reflect on those we have lost during the pandemic of the last 18 months.

After the poignant pause which saw all those in St Ann's Square stop what they were doing for a moment of communal silence and stillness, the city's squares and streets once again leapt into life with a blast of sound and colour on every street corner.

A fantastic programme of lively entertainment throughout the city centre saw everything from street theatre to samba, and brass to Bollywood, whilst back on St Ann's Square, people patiently queued to add their heartfelt words to the Manchester Love Letters wall.

Invited to contribute to the wall with their own messages and thank-you's alongside three local artists - who worked throughout the weekend steadily transforming the blank white letters into an amazing work of art from the heart - Mancunians did not disappoint.

They came in their hundreds during the weekend to write words from their hearts to show their thanks and to remember their loved ones.

It's hoped that the over-sized 'Love Letter to Manchester' - at more than 14 metres long and with 1.4 metre high letters - will go on public display after this weekend somewhere in Manchester, as a powerful symbol of the spirit of the city during the pandemic and a recognition of all those we want to remember and to thank.

Councillor Pat Karney, Chair of the Thank You Manchester weekender on behalf of Manchester City Council, said:  "Manchester is back! This feeling we've all felt this weekend after being able to see and to hear our city once more, and to enjoy everything it has to offer, is amazing.  It's like the city has woken up.

"Sleeping Beauty herself, waking up after one hundred years, could not have been happier than Mancunians this weekend.

"We have been dancing, laughing, and re-connecting with our families, our friends, and the city we love.

"And just as importantly, we've also made time to remember those we have lost, to reflect on what we have been through, and to say thank you where thanks are due from the very bottom of our hearts, to all those who have selflessly supported and helped us, during the most difficult of times these last 18 months."