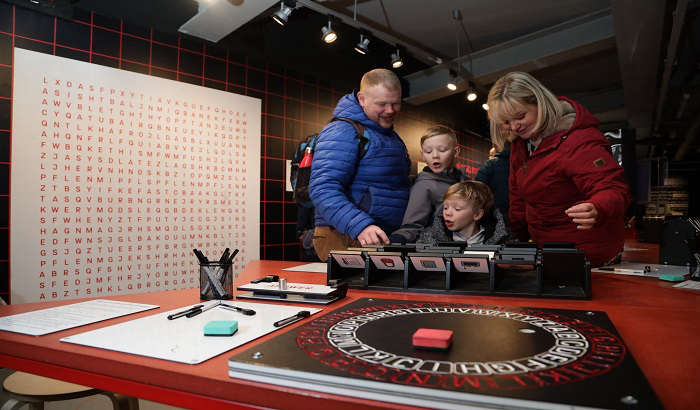 There’s only two weeks left to uncover the fascinating world of codebreaking, cyber security and secret communications at the free exhibition, Top Secret: From Ciphers to Cyber Security

Top Secret: From Ciphers to Cyber Security has been created alongside expert advisors from the UK’s intelligence, security and cyber agency, GCHQ, and will permanently close to the public on Sunday 5 June. This follows its successful run at the Science and Industry Museum in Manchester and Science Museum in London.

As part of the final weeks of the exhibition, there will be free family-friendly workshops and drop-in activities to create your own ciphers and to discover the fascinating world of cyber security. As well as a free cyber skills event to learn more about the many skills used in cyber security roles and meet real people working in cyber security in the Bradford area.

For the final time, visitors can discover more than a century of codebreaking history through extraordinary objects, interactive puzzles and first-person interviews. From the First World War to the latest in cyber security, fascinating stories will be revealed via hand-written documents, declassified files and artefacts from the historic collections of the Science Museum Group and GCHQ.

The 100+ exhibition objects reveal fascinating historical stories of communications intelligence from the last century, including cipher machines used during the Second World War, secure telephones of the type used by British Prime Ministers, and an encryption key used by Her Majesty The Queen. Other exhibits also chart the more recent history of cyber security and the work of GCHQ’s National Cyber Security Centre (NCSC), which works to defend against cyber-attacks.

Free tickets for Top Secret: From Ciphers to Cyber Security are available to book until 5 June via the National Science and Media Museum website. Tickets are free, but booking is recommended. Visitors will also need to book a general admission ticket.

The exhibition is supported by principal funder, the Department for Digital, Culture, Media & Sport (DCMS), which is working to improve cyber security skills and inspire the next generation of cyber professionals.