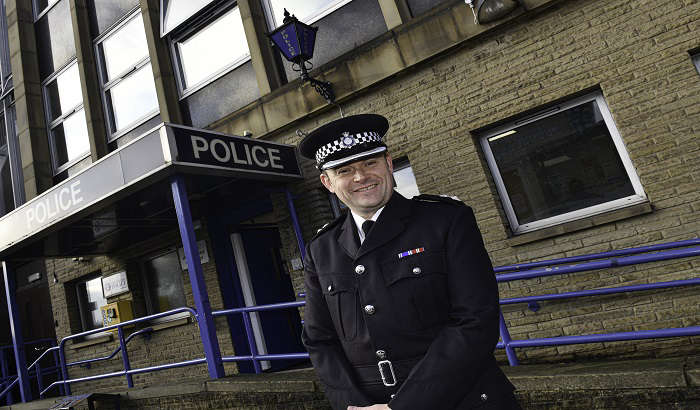 A Kirklees detective who led efforts to combat organised crime and protect children in the District has been appointed as its most senior police officer.

Chief Superintendent Jim Griffiths, who grew up in the Kirklees area, said he was delighted to start the New Year as the new District Commander for Kirklees Police.

The officer who worked across West Yorkshire Police for the last 24 years, including a period as the head of the Homicide and Major Enquiry Team, said he was proud of his roots in the Kirklees area.

He said: “Having grown up and then lived in Kirklees for most of my life, it is a real honour to have been appointed as the new District Commander for the area.
“I did serve here as a detective inspector for a number of years prior to returning as a detective superintendent in 2019, so this is a part of the world I’ve known extremely well as a police officer and also as a resident.
“There are some great communities here with good people in them, and a lot to be proud of in Kirklees.  What I want to do now is continue driving the work we have begun with partners to achieve positive change.”

Jim spent seven years in Kirklees CID in the late noughties before taking on a forcewide safeguarding role as a DCI during which he was the lead officer for protecting vulnerable children.

He then became a detective superintendent at the Homicide and Major Enquiry Team, leading it and investigating a number of high profile cases across West Yorkshire as a senior investigating officer.

Among the enquiries he led was the investigation into the murder of Jamie Brown in Ovendon in October 2018, which resulted in several convictions including one of Jamie’s attackers being jailed for life.

Chief Superintendent Griffiths also directed enquiries as SIO into a fatal car crash involving a stolen vehicle in Leeds in November 2017 which resulted in the deaths of five people.

The chief superintendent said some of the work he had been most proud of had been in safeguarding in which he had been the force’s lead officer for investigating child deaths,  and improving the service it offered to parents.
“Clearly losing a child is one of the most appalling and distressing experiences any of us could face,” he said.  “What we wanted to do was improve the force’s response to families in these tragic circumstances and worked with the Forget Me Not trust in Huddersfield to improve and provide the support to Parents across West Yorkshire. We also worked with partners nationally to improve the local policing response to investigations of this type.”

Within Kirklees, Jim said real progress had been made in recent years at tackling big challenges such as gang crime and child sexual exploitation, with a number of major court cases resulting in the high profile convictions of organised criminals, and CSE offenders.

He said: “We have seen sustained falls in violent and gang related crime in Kirklees since 2019 and I do believe the District is now in a better place in this respect.    There is some fantastic work ongoing by police officers and partner agencies in these areas.
“There is much more to be done of course and a number of significant enquiries remain ongoing into serious organised drugs and gun crime, led by Programme Precision.
“We are determined to continue this work and urge anyone who has information about drugs or gang crime in their communities to report it to the police or anonymously to Crimestoppers.”

The Chief Superintendent added: “We are of course also continuing our investigations into non recent child sexual abuse in the District.
“Operation Tendersea has resulted in abusers being sentenced to what now  amounts to hundreds of years in prison, with more child sexual abuse cases now going through the courts.    We continue to urge anyone who may have been a victim of sexual abuse in the past and not reported it to tell us so we can fully investigate.”

Looking over the years to come, Jim said a priority over the next 12 months would be to continue work to protect vulnerable children and adults whilst also tackling areas that impact on all communities across the District
“Safeguarding the vulnerable has always been a focus in my work as a police officer and I have been part of the Adult and Children’s Safeguarding Partnerships in Kirklees for many years.”
“Protecting children and vulnerable people is an absolute must but I am also aware that issues such as antisocial behaviour and more localised crimes in communities are important and affect the lives of Kirklees residents.”
“The investigative experience that I have gathered over the years will be vital in continuing to improve our response to the challenges in the District as we aim to continue to drive down the numbers of people who become victims of crime.”