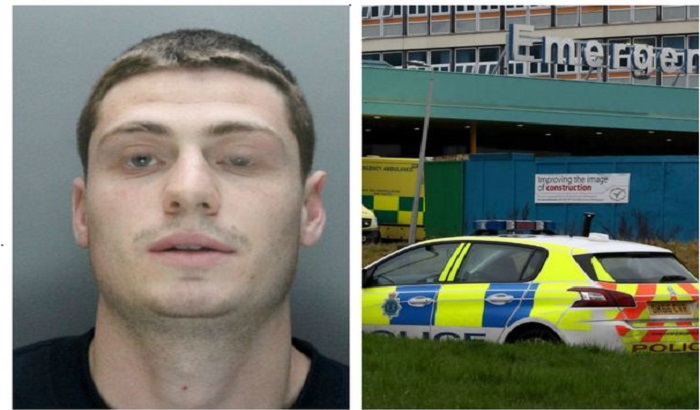 The authorities are on high alert after a gangland killer was sprung from custody by an armed gang while on a hospital visit.

The authorities are on high alert after a gangland killer was sprung from custody by an armed gang while on a hospital visit.

Merseyside police has confirmed that 38 year old Shaun Walmsley, remains at large after the ambush outside Aintree University hospital in Liverpool at about 3pm on Tuesday.

Walmsley was getting into a minicab with two prison guards when they were threatened with a gun and knife by his accomplices. Neither guard was seriously hurt but Walmsley escaped with the attackers in a gold-coloured Volvo.

Walmsley, a drug dealer who ran a nationwide crime network, is serving a life sentence for the murder of Anthony Duffy, who was lured to a street near Aintree racecourse and repeatedly stabbed in 2014.

Merseyside police described the gunman who assisted in Walmsley’s escape as having his face covered and wearing white shoes, grey tracksuit bottoms with a stripe down each side, a grey hoody and a dark coat. The man armed with a knife had his face covered and wore a green coat, dark Nike trainers and grey tracksuit bottoms. Walmsley is about 6ft tall and of slim build with dark brown hair and blue eyes. He was last seen wearing dark bottoms and a dark jacket.

Detectives are advising the public not to approach Walmsley if they see him, as he is thought to be armed and dangerous, anyone with any information should call the Police via 999.