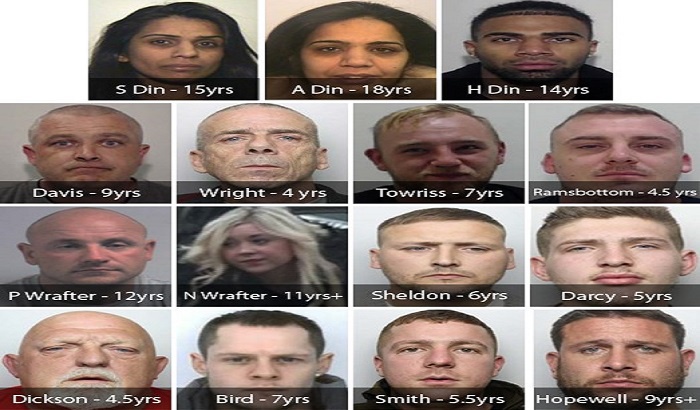 The last nine men and four women from a serious organised crime group have been jailed for a total of over 100 years after a joint-investigation by Greater Manchester Police and South Yorkshire Police seized over £3million’s worth of drugs.

The final set of verdicts were heard this week and come after a two-year-long cross-border operation, led by GMP’s Serious and Organised Crime Group, into the substantial supply of class A and B drugs between Bury and Doncaster – codenamed Operation Heart.

A total of 18 people have now received custodial sentences totalling 139.5 years as part of the investigation – which uncovered £3million’s worth of drugs, £300,000 in cash, a firearm, ammunition, and an established cross-Pennine cohort that couriered and exchanged substantial amounts of drugs.

The following group were sentenced between Monday 27 July and Wednesday 29 July 2020 at Manchester Crown Court, Crown Square, for conspiracy to supply class A drugs:

£2million's worth of heroin was recovered from Lee Davis in June 2019, including his van

After a delay in proceedings due to COVID-19, the following five men were sentenced between Tuesday 1 December and Wednesday 2 December 2020 at Manchester Crown Court, Crown Square, for conspiracy to supply class A drugs:

The following were also convicted for class A drug offences and were sentenced at Sheffield Crown Court:

The following were also sentenced:

A summary of Operation Heart in numbers

In December 2018, GMP initiated an operation to target those responsible for the trading of bulk quantities of Class A drugs between the Bury area of Greater Manchester and the Doncaster area of South Yorkshire.

The court heard that Shazia Din and Peter Wrafter colluded to form a network using their team of couriers on either side of the Pennines to facilitate the transportation and dissemination of drugs across both regions.

Din and her siblings – Hassan Din and Abia Din – operated an online beauty product supply business as a front for their covert criminal enterprise.

Detectives began to rigorously piece together intelligence that led them to make a number of arrests in Greater Manchester and South Yorkshire in the opening months of 2019.

Police also collated numerous amounts of key evidence – such as drugs, cash and mobile phones – from a host of vehicles and properties, some of which were resided by vulnerable people who had been exploited so that their home could be used as a drugs base.

The most significant haul was during the arrest of Lee Davis while he was loading kilos of heroin into a van in June 2019. That day, a total of 28.2kgs of heroin (worth an estimated £2.8million) was seized from a combination of the van and a flat in Salford.

On Wednesday 24 July 2019 – with Wrafter already convicted and a significant number of accomplices arrested – GMP co-ordinated a final day strike to arrest Shazia, Hassan and Abia Din and the other remaining conspirators.

This included Wrafter’s daughter, Nicola Wrafter, whom had replaced her father after his arrest and subsequent conviction, in continuing to collude with Shazia Din.

A total of 20 people were arrested, charged and have now been sentenced to a combined total of 139 years and six months.

Detective Inspector Lee Griffin, of GMP’s Serious and Organised Crime Group, said: “During the operation we scrutinised this group intensely as we uncovered their illicit activities across the country, enabling us to gather evidence and unravel the conspiracy.

“It is thanks to the hard work of all the officers in this case from Greater Manchester and South Yorkshire Police that a group of criminals using sophisticated methods have been stopped from deluging our streets with huge amounts of drugs.

“This operation pre-dates the recent advances in breaking encrypted criminal communication and required a significant amount of time, effort and skill from those tasked with tackling the crime group.

“We have disrupted the supply of drugs and cash payments between the regions of not just Greater Manchester and South Yorkshire, but around the UK.

“Drugs wreck lives, destroy relationships and blight our communities – it was also clear in this case vulnerable people were exploited to further the illegal trade in drugs. Those who are responsible for supplying illegal drugs to vulnerable people deserve no place in our society, and our community is a safer place with them behind bars.

“I hope this sentencing sends a clear message that GMP will work with our colleagues around the UK to relentlessly pursue those persons who supply harmful drugs and we will go to the great lengths required to bring them to justice.”

Acting Detective Inspector Lee Wilson, from Doncaster CID at South Yorkshire Police, said: “This is a significant result for both South Yorkshire and Greater Manchester, as a large number of individuals involved in serious organised crime are now behind bars.

“Our partnership working also saw the seizure of significant amounts of drugs, which cause untold harm within our communities, and cash – ill-gotten gains from this group’s criminal lifestyle.

“We remain absolutely steadfast in our commitment to tackling organised crime and drug supply within Doncaster and South Yorkshire, to keep our residents safe.

“We know that organised criminal groups such as this can often prey on our most vulnerable members of the community and make people feel intimidated or scared to tell the police what’s happening.

“I hope today’s result sends a strong message that forces across the country will stop at nothing to bring organised criminals before the courts and where those groups cross force borders, we will work together and combine our efforts to bring to justice those who would seek to cause harm and fear within our communities.”