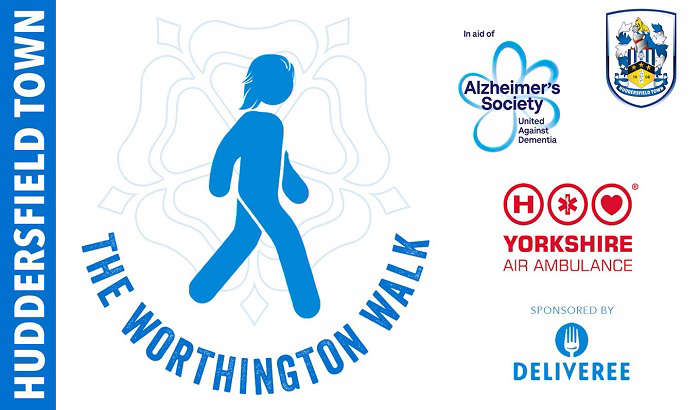 145 football fans will come together on Saturday morning to complete a fundraising walk in honour of Huddersfield Town legend Frank Worthington, who sadly passed away earlier this year.

Dubbed the ‘Worthington Walk’, supporters will walk either all or some of the 22-mile route between Frank’s old clubs in Yorkshire, starting at Leeds United in the early hours of 16 October and ending at Huddersfield Town’s John Smith’s Stadium via the Shay, home of FC Halifax Town.

Participants have committed to raise at least £100 each, with proceeds to be split equally between the Alzheimer’s Society and the Yorkshire Air Ambulance.

The walk will be completed in time for participants to enjoy Town’s Sky Bet Championship game against Hull City at 3pm, where around 30 of Frank’s close family will be in attendance after having completed the walk.

Frank enjoyed a fantastic playing career that spanned across nearly three decades both in club and international football.

He was among the most elegant of all Town players on the ball, with his trademark look of sideburns, no shinpads and wearing his socks low around his ankles, leading Town manager Ian Greaves to describe him as ‘the working man’s George Best’.

“It’s fantastic that we’ve been able to organise this event in memory of such an incredible man.

“We didn’t get the chance to say a proper goodbye to Frank and acknowledge the impact that he made on our, and many other, football clubs during his time as a player.

“Not only that, but he continued to impact them even after his career had ended.

“Frank was a regular spectator at the John Smith’s Stadium, right until the pandemic hit.

“To be able to commemorate his life with those he inspired is hugely important to us as a Club.”