Exhibition Opens To Commemorate The Centenary Of The Low Moor Tragedy 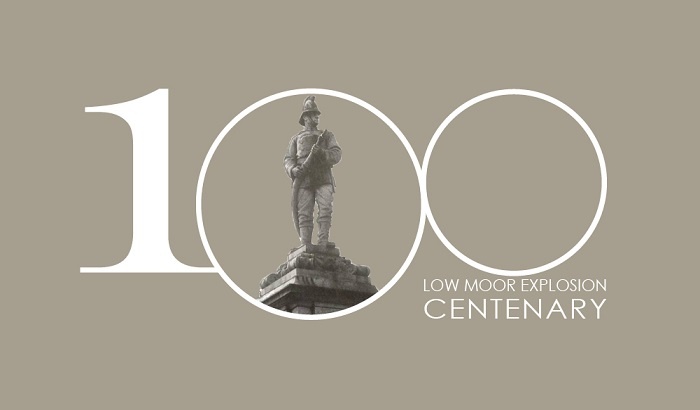 An exhibition commemorating the centenary of the devastating explosions at the Low Moor Munitions Company on 21 August 1916 will open at Bradford City Hall today.

The company produced Picric Acid to colour carpets, which was also a product of high explosives and was converted into a munitions factory on the outbreak of World War One and had been expanded to cope with demand.

The explosion on 21 August 1916 killed 40 and injured over 100. The first explosion sent up a huge cloud of smoke and was heard as far away as York.

Further explosions killed five of the 15 firemen and one of the three officers who had rushed to the scene from Bradford and Odsal.

The fire from the explosions spread to the nearby gas works where the gasometer exploded. Explosions continued for the rest of the day and the whole fire took three days to put out.

Due to the war newspapers were not permitted to report the incident in detail. However word of mouth spread news of the explosions and thousands of people came to the funeral procession, to thank the firefighters who helped and to pay their respect to those who died.

The exhibition contains nine of the medals awarded by Bradford Council on behalf of the city, to the brave firefighters who attended the incident as well as the manager of the company, who led the works fire brigade but died as a result of the explosion. Also on display are items from the “Hayhurst” fire appliance which was destroyed in the incident and photographs.

Also on display is a figurine of one of the firefighters who attended the incident which was a gift from former Lord Mayor Coun Joanne Dodds commemorating her civic year. The figurine is a scaled down replica of a statue at the West Yorkshire Fire and Rescue Service Headquarters which is dedicated to the firefighters who lost their lives at Low Moor.

Lord Mayor of Bradford, Coun Geoff Reid, said: “This is a fascinating exhibition commemorating the bravery of those firemen who put their lives on the line almost 100 years ago as do firefighters today. This tragedy is an event in Bradford’s history which should not be forgotten.”

Chief Fire Officer Simon Pilling said: “We have created this centenary exhibition in tribute to the firemen who so tragically lost their lives in the line of duty 100 years ago.

“Their bravery was in the true honour of Fire Service tradition and their names live on as we remember the ultimate sacrifice they made that fateful day in their bid to save others.”

Anyone interested in seeing the exhibition can go to Bradford City Hall reception or take part in the Sneaky Peeks Tours of City Hall on Wednesdays 2-4pm until 7 September and Thursdays 1-3pm until 8 September.