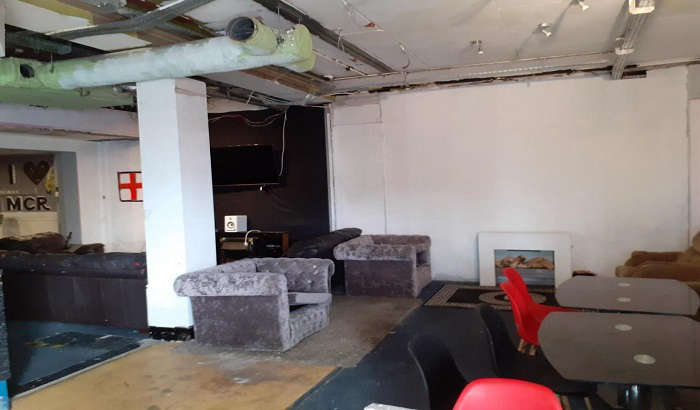 A former bank has been closed down by the Council after officers witnessed unregulated, large-scale events being held at the building leading to serious incidents of anti-social behaviour.

Manchester Magistrates issued the Closure Order for the property – 554-556 Hyde Road in Gorton – following reports of events being held despite having no events licence, no licence to serve alcohol, no certificates to serve food, and the building being in a state of disrepair.

The property, informally known as the ‘Hyde Road Café' and ‘The Spot’, was purchased in December 2020 by a private owner and sublet to another party. Neither party applied to the Local Planning Authority for a formal change of use and no Council Tax or Business Rates have been paid against the property.

The Magistrates branded the premises a “very dangerous place” and a “death trap” before issuing the closure order, which will mean no one can enter the property – other than the property owner or named individuals - for three months.

While operating, the illegal venue hosted large events, including DJ nights and late-night club events, including during the Covid-19 lockdown. These events often ran late into the night and with loud music, disturbing local people.

Police officers were called to the premises several times since the beginning of 2021 and met with abuse and violence.

The  main occupier of the property also claimed to have renovated the building into a space that includes a bar, dancefloor, beauty salon and luxury accommodation. However, the premises was found to be in a state of disrepair with exposed wires, uneven flooring and of a poor standard of cleanliness.

“It beggars belief that the people behind this operation thought they could get away with running an illegal and clearly unsafe venue, which was quickly becoming a blight to local people.

“Nightclubs and similar businesses operate within strict regulations to keep their customers safe – all of which was ignored here, and during a pandemic. I shudder to think what could’ve happened at this premises had these unregulated events been allowed to continue.

“Council officers have worked really closely with officers at Greater Manchester Police to close down this premises and I thank them for their excellent support and partnership throughout this operation.”

"Working closely with our partners at Manchester City Council, the neighbourhood and response teams have provided documentary evidence of the disorder, unlicensed and unregulated activities at 554-556 Hyde Road and the negative impact that they have burdened upon the community. The venue and the modifications are wholly unsafe. The alterations are shambolic, of poor standard and completed without appropriate permissions. Cleanliness, hygiene and regard to the Covid-19 lockdown restrictions did not factor in the illegal operation of this venue and both the local community and Greater Manchester Police fully support this closure order."