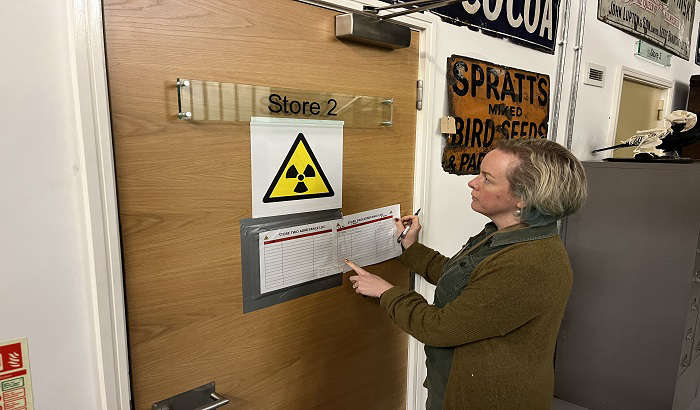 A black widow spider found inside a box of supermarket grapes is among the hair-raising discoveries safely stored in Leeds’s hidden danger room.

The highly venomous arachnid is one of hundreds of specimens secured inside the unassuming Store 2 at Leeds Discovery Centre, home to parts of the city’s collection designated so dangerous, they need their own room.

Museum records show the eight-legged stowaway, famed for its unusually potent bite, was found by staff at a Leeds supermarket in 1991, where it had hitched a lift inside the imported grapes.

Although it is not known if the surprisingly tiny spider survived its trip, its body was later donated to Leeds Museums and Galleries, where it has since been preserved in a jar of concentrated alcohol.

The black widow is stored alongside hundreds of other creatures collected from around the world, including notorious Brazilian wandering spiders, large scorpions, deep sea fish and an octopus.

The liquid in which the animals are preserved means they must be kept in a specialist area which is appropriately ventilated to prevent the build-up of potentially harmful fumes.

But those fumes are not the only hazard in Store 2, which also houses the Leeds collection’s radioactive materials, each of which is regularly assessed using a Geiger counter.

They include a number of gigantic teeth from prehistoric apex predator Megalodon. An extinct species of shark which roamed the world’s oceans more than 20 million years ago, Megalodon grew to more than 50ft long and weighed in excess of 60 tonnes.

Because of the very specific strata of rock they are fossilised in, Megalodon teeth can give off trace amounts of radiation which can be harmful if exposure to it is prolonged.

Other radioactive materials housed in Store 2 include Victorian glassware with a beautiful green tinge which belies a dangerous secret. The colouring was on trend in the 19th century as it helped ornaments stand out in the early evening light.

But the aesthetically-pleasing effect was achieved using small quantities of uranium, the radioactive element used, in much larger quantities, to power nuclear submarines.

Clare Brown, Leeds Museums and Galleries’ curator of natural sciences, said: “There’s a natural sense of mystery and curiosity around Store 2 and the objects inside, and they’ve certainly been safely locked away for good reason.

“But each object has also been collected and kept safe because they tell us something important about our history and the world around us.

“The black widow, for example, is a fascinating creature with a fearsome reputation. But the story behind this particular specimen also demonstrates how the scope and scale of global food production and transportation has affected the lives and behaviours of native species all over the world.

“Studying these hazardous objects very carefully can offer curators a unique insight into everything from natural history and geology right through to mass production and social trends, and hopefully, we can pass some of those fascinating lessons on to our visitors.”

Because of the nature of its contents, access to Store 2 is restricted to trained members of staff and is off limits to the public.

But visitors to the Discovery Centre, which is open for tours by appointment, can still see an astonishing array of insects and arachnids which were also discovered in supermarket produce.

They include a banana spider which arrived from the West Indies along with an egg sac containing 350 tiny spiderlings and a number of fearsome-looking Indian scorpions of various sizes.

“But it is this painstaking, behind-the-scenes research and work which goes on every day that makes those exhibitions possible and which ensures Leeds is home to a truly world class collection of objects.”

The Leeds Discovery Centre is home to more than a million objects and is used to store parts of the Leeds collection which are not currently on display, spanning tens of millions of years of world history.