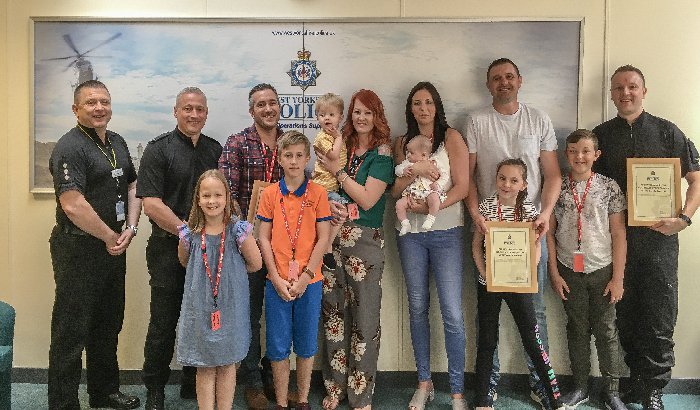 On the 30 April last year, Kerry Draycott from Wakefield was travelling with her family down the M1 motorway when she suffered a massive heart attack.

Her husband Ryan stopped the car and began immediate CPR, whilst also trying to phone an ambulance and look after his young children.

PC Craig Bould from the Dog Support Unit had just finished his shift at the nearby Carr Gate Policing complex and saw what was happening. He stopped to provide assistance before the ambulance arrived.

Another member of the public, Christopher Barker from Goole, was also travelling down the motorway with his family and pulled over to offer his help.

Minutes later, PC Daniel Baldwin was dispatched to the incident and was able to give further support to Ryan and the children.

Kerry was subsequently taken to Pinderfields Hospital in a critical condition. Over 12 months on and she is making significant progress with her recovery.

All of those involved received Operational Support Commendations for their part in helping Kerry during this life threatening emergency.

West Yorkshire Police, Chief Inspector Mark Bownass handed over the certificates at the presentation alongside Kerry and said: “Had it not been for the intervention of those present on the day, it is highly likely that Kerry would not have survived.

“This presentation was really an opportunity for her to thank all those who helped her and her family on the day.

“She was able to give each of them their certificates of commendation and to recognise the public spirited attitude of all those concerned.”