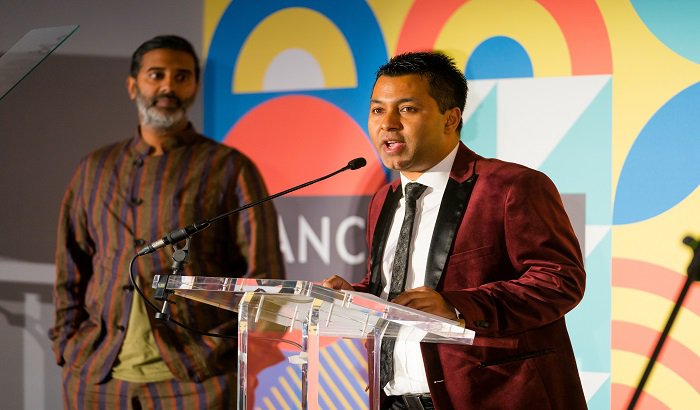 Councillor Luthfur Rahman, Manchester City Council's Executive Member for Culture, Leisure and Skills has been awarded an OBE in Her Majesty The Queen's Birthday Honours.

The award has been made for services to local government in recognition of the Labour member's many achievements since he was first elected as a local councillor in 2008 for Manchester's Longsight ward - a ward he has continued to serve since then, being successfully re-elected in 2012, 2016, and 2018.

Born in Bangladesh, his family came to the UK in 1980, setting up home in Longsight when Luthfur was three years old.  He attended local schools St Agnes Primary and Burnage High School, and after a spell at Stockport College went straight into business at the age of 17, opening his first takeaway restaurant in Wilmslow, Cheshire.

Over the course of the next 22 years he continued working in the catering trade establishing several different successful restaurants and takeaway businesses, and also practised as a qualified mortgage advisor, establishing his own company in 2006 - running his businesses alongside his work as an elected member when he first became a councillor in 2008.  After being re-elected to Longsight ward for the third time in 2016 he took the decision to concentrate full-time on his council role and left the catering and mortgage trades behind.

During his time as an elected member of the council Luthfur has made his mark in many different areas - with notable successes on initiatives involving young people, skills, culture, libraries, sports and leisure, as well as race and diversity.

As Executive Member for Culture Leisure and Skills - a role he has had since 2016, one of his main priorities has been to widen access and participation in the city's cultural and leisure offer.

He initiated the 'If We Can You Can' campaign to get more people active, and also the 'Mcr Active Card' which offers discounts and incentives to people to get active.  The aim was to get 20,000 people signed up to the card scheme in 12 months.  In fact by 18 months more than 100,000 people had signed up - in so doing giving the council a much clearer picture of who is engaging with what's on offer and more importantly which residents are not and what the barriers are that are stopping them.  Following on from this the council engaged in one of the largest public consultations about sports and physical activity, and as a result launched Manchester's 10 year Sports and Physical Activity Strategy.

Another key priority for Luthfur has been increasing diversity in the cultural sector, along with raising the profile of the wider benefits of culture, arts and creativity.  Earlier this year he was named Best Arts Champion in the national Hearts for the Arts awards that are made annually.

He has been a loud voice in advocating for more diversity in the programmes of the city's cultural institutions, and currently sits on the boards or committees of several cultural organisations including Arts Council North Area Council, Manchester International Festival, and Greater Manchester Arts Centre.

He established the first ever Manchester Culture Awards in 2018 to recognise and shine a spotlight on the breadth of Manchester's cultural landscape and its benefits.  The awards proved hugely popular with both cultural organisations themselves and the public - with nearly 300 nominations across 12 different categories received.

The culture awards also recognise the enormous amount of local talent involved in the cultural industry and the massive contribution it makes to the city's economy, and the role it has in helping make Manchester a vibrant place that people want to live in, work, and visit.  Throughout the last six months since cultural venues were forced to close their doors in March Luthfur has continued to make the case for culture and to keep pushing for urgent support for the sector to keep it alive, and as part of this has overseen the drawing up of a Cultural Recovery Plan for Manchester to help the sector and the city move forwards through the Covid crisis.

Other achievements during his time as Executive Member for Culture include working with a local poet to develop the 'Made in Manchester poem two years ago - a poem currently made up of 64 languages but which aims to eventually capture the 200 different languages spoken in the city - and also working with the University of Manchester on the city's application to UNESCO for City of Literature designation which the city achieved in 2017.

Young people have been and continue to be another key priority for Luthfur.  Over the last three years he has led on the Curriculum for Life now being incorporated into traditional learning by the city's schools to help better equip young people with the skills they need in life, and established the now annual Youth Buzz Awards back in 2017 to recognise the achievements and talents of the city's young people.

He has also recently been responsible for setting up the UK's first ever Shadow Youth Executive that sees each member of the Council's Executive shadowed in their role by a young person to ensure the views of young people are reflected across the full scope of council planning and decision making.

Other notable achievements by Luthfur include the introduction of race equality into the business planning of every directorate across the council when he was lead member for Race, and overseeing the 20mph schemes across Manchester as Assistant Executive Member for Environment.

Councillor Luthfur Rahman OBE, said:  "To say I was surprised when I opened the email telling me about the award has to be the understatement of the year. This is not something I was expecting, and I wasn't at all sure it was something I deserved over anyone else - especially when I look around and see all the incredible things other people do.

"Being recognised in this way by Her Majesty is a huge honour and one that for me also brings with it an enormous personal responsibility to make sure that I live up to it, that I don't let people down, and that I work even harder to help make a real difference to the lives of everyone living in Manchester."

As a local member for Longsight ward Luthfur's achievements include founding the Longsight Festival and the Longsight Standard, helping set up the Longsight Traders Association, and supporting the establishment of Manchester Youth Academy - a local youth organisation that uses sports as a tool to engage and support young people's aspirations.

Sir Richard Leese, Leader of Manchester City Council, said:  "This award comes after a six month period like no other that has seen the city and whole country having to deal with the devastating effects of the Coronavirus pandemic on individuals and our way of life - a period that on a very personal level also saw Luthfur himself hospitalised with the virus at its peak, something that shocked all of us and brought into even sharper focus the impact the virus was having and continues to have on people of all ages.

"Everyone who knows Luthfur knows that he is a non-stop 24/7 person, who cares passionately about making a difference to people and to our community.  He's someone who is always looking one step ahead - whether that's about broadening participation in the arts, championing diversity, encouraging everyone to get active and exercise more, or giving young people the opportunities and skills they need to succeed in their lives.

"This national recognition of the enormous contribution he has made to local government here in Manchester in what has been a relatively short period of time, reflects the sheer hard work he puts in every day and is very well deserved."