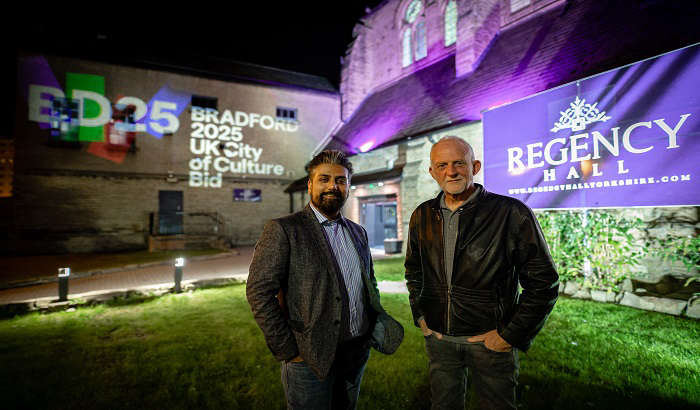 Bradford 2025, the city’s bid for UK City of Culture 2025, has welcomed three new corporate partners each of which have come up with an imaginative and creative way to raise awareness of the city’s cultural ambitions.

Bradford’s historic Grade II listed Regency Hall (formerly St. Marys Roman Catholic Church) – a major events and conference space near Little Germany – joins as Bid Champion. From this week, every evening from dusk the exterior wall of this majestic building is now illuminated with a colourful large-scale projection of the BD25 identity.

Raj said: “I knew we had a fantastic opportunity to use this beautiful building to create something visually striking to support the district’s bid. We get so much footfall here it’s a brilliant way of raising awareness of the campaign.

“I’m also thrilled that Sunrise Radio is now a media partner. We have a huge audience in the Asian community here in Bradford and beyond, and it’s so important that everyone with a connection to the city knows about the bid and the impact it could have. I know the Bradford 2025 team feel passionately that a major strength of our bid is the diversity of our population and we will do whatever we can to make sure the district’s voices are heard. We can play a key role in letting our listeners how they can help shape the bid – and of course if we win, how they can make the most of the cultural celebration that will transform the district in 2025.”

Bradford-based restaurant group, Jinnah, which joins as a Founding Partner, has branded the roof of its events marquee in the grounds of its city centre restaurant on Leeds Road; added colourful vinyls to the restaurant windows and installed a Bradford 2025 banner on the roadside.  The family-run business began as a corner shop in Bradford in 1981 before opening eateries in Harrogate, Selby, York city centre and at Flaxton, near York. The company invested more than £500,000 in its first Bradford restaurant which opened in 2015 and has quickly become a foodie destination in the district.

Saleem Akhtar, managing director of the Jinnah group of restaurants, who came to Bradford from Pakistan at the age of 10, commented: “Our Bradford restaurant has a prominent position on one of the busiest roads into the city, so it made sense to use the Bradford 2025 identity to capture the attention of the hundreds of drivers that pass by every day, as well as our many loyal customers. We’re committed to raising awareness of the city’s bid, and we’re already exploring many other ways to get the message out there including branding our takeaway bags for example.

“Food is such a huge part of the culture here in Bradford, and curry in particular is synonymous with the city, so we are excited to come on board as a partner. I hope the district’s incredible foodie heritage will play a role in inspiring the programme, as well as being something for locals and visitors to enjoy at every event in 2025.”

New Bid Partner, Expect Distributions, a family-run logistics and warehouse company, has branded a number of its fleet with the BD25 logo. The trucks will travel the length of the country flying the flag for Bradford’s bid over the coming weeks. The business, which was named Haulier of the Year for the second year in a row at the 2021 Motor Transport Awards, employs around 300 people across the district.

Neil Rushworth, Managing Director of Expect Distribution said: “We’re thrilled to be taking the Bradford bid on the road. We are proud to be from Bradford having operated from the city for more than 30 years, and we’re fully on board with showing our support for the bid. I know our whole team are excited about what winning the title could mean for the district.”

Bradford 2025 is the city’s bid to be UK City of Culture 2025. Awarded every four years by Government the UK City of Culture title has had a transformational impact on previous host cities, securing millions of pounds of investment and acting as a catalyst for creative place-making and culture-led regeneration. Bradford district’s bid is backed by Bradford Metropolitan District Council with the University of Bradford as a strategic partner.

Bradford 2025 is driven by the Cultural Place Partnership which includes Bradford Council, University of Bradford and other representatives of the cultural sector and national funders. The bid forms part of Culture is Our Plan – Bradford Council’s cultural strategy until 2031.

In July 2020, Bradford district was officially named as one of 20 UK cities bidding for the title, the highest number of entries in the competition’s history and a resounding show of confidence in the transformational impact the designation can afford.

The next key milestones in the bidding process are…

Businesses and organisations of any size and any location can get involved and help to support Bradford 2025 in a variety of ways including sponsorship and partnership packages. To find out more email mick.chandsoor@bradford2025.co.uk.