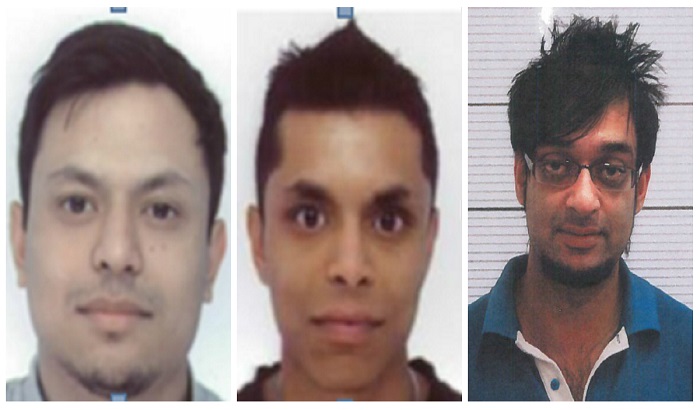 Three Black Country men have today (Friday 5 August) been convicted of helping to fund a Walsall man who is currently fighting in Syria with Daesh.

The three, including two brothers, transferred money and sold items on eBay to raise cash to send to Musadiqur Rohaman, who is believed to have joined Daesh after travelling to the conflict zone.

The siblings were charged with sending money to their other brother, Musadikur Rohaman, aged 26, who travelled to Syria in December 2014, with his Islamic wife, Zohura Siddeka, aged 29.

The couple travelled to Syria via Turkey with another Walsall man, Abul Hasan, who is since believed to have been killed while fighting with terrorist forces.

While in Syria, Rohaman maintained contact with his family in the UK through a variety of secure internet messaging platforms and Skype. Some of these messages to home prove he had been engaged in fighting with rebel forces in the conflict zone.

The brothers, who worked at the family launderette business in Caldmore, raised cash and sent it to the couple via Western Union Bank transfers made at a shop next to their business in Walsall.

A total of £10,000 was sent to the couple in Syria, including a number of maternity payments that Zohura Siddeka was still receiving from her teaching job in Walsall. Siddeka sent the brothers her banking details and password, so money could be taken out of her account and sent via transfer back to the pair in Syria.

Iqbal was found guilty of five counts of funding terrorism under the Terrorism Act 2000 and Suyaubur was convicted of one count.

Another man has also been found guilty of funding terrorism by selling items to raise cash.

He was arrested by counter terrorism officers on 14 January 2016.

The court heard that Atiqur Khan was recruited by one of the brothers to help raise cash for Rohaman in Syria, taking out credit cards in Rohaman’s name and attempting to sell pieces of family gold.

The inquiry into the three men began when officers were carrying out investigations into other members of a group in Walsall, for unrelated terrorism offences. The group Shaukat, Moore, Thomason and Nash were convicted following prosecution through Central Criminal Court, London in February 2016.

Assistant Chief Constable Marcus Beale, who leads on counter-terrorism for the West Midlands, said: “Police originally searched the Castle Road address in June 2015, in relation to the disappearance and suspected travel to Syria of Rohaman and Siddeka.

“Investigations found that Musadiqur was fighting in Syria and that both Iqbal and Suyaubur were aware of what their brother was doing. It is believed Musadiqur directed his brothers in what he needed doing and sent them names of who to transfer money to.

Suyaubur then used his passport to carry out a number of money transfers to Musadiqur."

ACC Beale added: “Disruption of terrorist funding is an important part of our investigations. Sending money to those actively engaged in terrorism helps fund their activities and we will continue to act on any intelligence and disrupt the flow of money to conflict zones.”

Sentencing is due to take place on 9 September.

Anyone who knows of someone who may be potentially vulnerable to being drawn into terrorist-related activity, including travelling abroad to conflict zones should contact local police for advice and support on 101.