Arsonist Sentenced To More Than 18 Years For Manslaughter of Grandmother

An arsonist has been sentenced to more than 18 years for starting multiple house fires, including a blaze which killed a 74-year-old woman.

Tyler Flanagan (20) from Dewsbury was sentenced to 18 years, six months at Leeds Crown Court on Friday July 31 for setting a spate of fires in the

Kirklees area.  They included a fire on Leeds Road, Huddersfield in June 2019, which caused the death of 74-year-old mother and grandmother Julia Flynn.

The 20-year-old was found not guilty of murder, but admitted manslaughter in relation to the fire which he set during the late evening of June 17, causing Mrs Flynn to suffer injuries which caused her death a few days later. 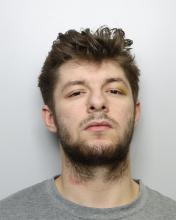 He has been branded ‘a highly dangerous individual’ by senior detectives who said there was no apparent motive for the series of arson attacks.

The twenty year old admitted starting fires at two other properties in Mirfield and on a car during the same month, as well as an attempted burglary.

His sentence of time to be served in prison included 13 and a half years custodial with an extended licence on release of five years, taking the overall sentence to 18 years six months.

Detective Chief Inspector Heather Whoriskey, senior investigating officer in the case, said: “Tyler Flanagan is a highly dangerous individual and we are pleased to see him jailed for this spate of fires, including the blaze on Leeds Road on June 17th  which tragically took the life of Mrs Flynn.

“He has never accounted for why he carried out these terrible acts and his actions have cut short the life of a much loved mother, grandmother and wife and recklessly endangered the lives of others.”

She added:  “Flanagan was caught following a thorough investigation by officers and I also want to pass on my thanks to residents who responded to our appeals for information.

“Our thoughts remain with Mrs Flynn’s family and we hope seeing Flanagan put behind bars may bring them a sense of closure as they continue to cope with the loss he has inflicted on them.”

In a statement Mrs Flynn’s family, said: '' Nothing is going to make anything better for our Mum, Grandma, Wife. A woman who had spent her life working very hard and taking care of others.

Nothing will make the trauma we have experienced and continue to experience, any less. This will never end for us.

“He is an extremely dangerous person, and would have continued to destroy and hurt people with no care or limit. We are just glad the police took him off the street as quickly as they did.''