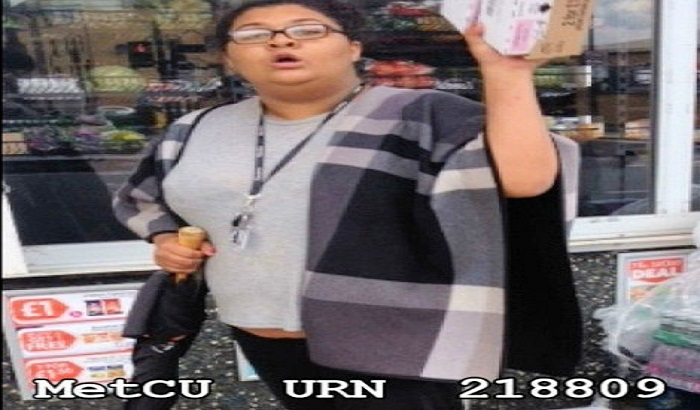 On Sunday, 26 June police were called at around 12:15hrs to a report of a racially aggravated assault outside Fresh Go, Roman Road, Bethnal Green.

CCTV footage outside the store caught the moment the suspect, a black woman in her mid-twenties shouted racial abuse at Asian shop staff when they refused to sell her alcohol whilst she was obviously drunk.

After shouting and swearing racial abuse, the large woman blocked the door preventing customers entering and leaving the store and demanded to be served spirits. When further refused, she continued to racially abuse the staff and threw stock at them as they were taking a delivery.

The suspect then left the store and walked off into Palmers Road.

The suspect is described as a large built black woman in her mid 20s, 5ft 5ins tall wearing a grey t-shirt, black trousers, white trainers and a chequered shawl. She had black shoulder length hair and wore black rimmed glasses.

Police are keen to hear from anyone who may recognise or witness the woman shown on CCTV.

Anyone with any information is asked to contact police on 101 quoting reference number 218809 or Crimestoppers anonymously on 0800 555 111.