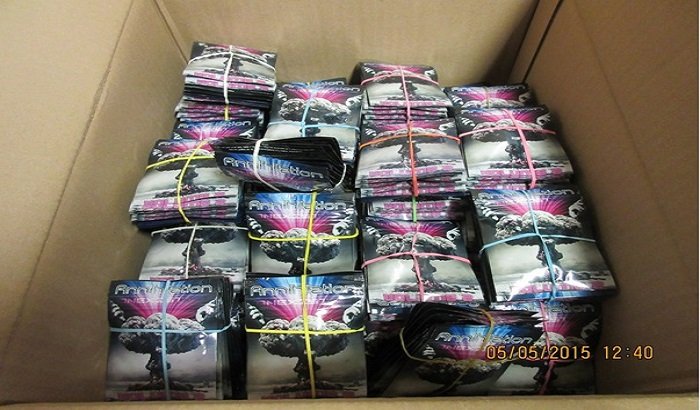 West Yorkshire Trading Standards has been granted forfeiture orders by Leeds Magistrates for the destruction of legal highs totalling to a street value of approximately £170,000, seized in a series of raids across the City earlier last year

New Psychoactive Substances or Legal highs, as they are also known, are substances which produce the same, or similar effects, to drugs such as cocaine and ecstasy, but are not controlled under the Misuse of Drugs Act.  They are however, considered illegal under current medicines legislation to sell, supply or advertise for “human consumption”. To get round this sellers refer to them as research chemicals, plant food, bath crystals or pond cleaner, but there is evidence of people buying them and taking them, resulting in anti-social behaviour.

In a partnership operation, following intelligence provided by Leeds District Neighbourhood policing teams, Trading Standards Officers and Police colleagues initially visited a number of premises in Leeds on 24th April 2015 that were selling legal highs to advise the traders of their legal obligations and served notice that all such products should be removed from sale.  Premises visited included:

Upon returning to the shops on 5th and 6th May 2015, Trading Standards and Police Officers found that despite the warnings, legal highs were still on sale and as a result Trading Standards issued a suspension notice, removing all stock for further analysis.  Over 16,000 packs of legal highs were suspended, and samples of each brand submitted to the West Yorkshire Analytical Services for detailed analysis of the ingredients.

Results showed that many had anaesthetic effects, some contained serious toxicity levels and would have hallucinogenic effects on users and others consisted of synthetic cannabinoids which act like and have a similar effect as, cannabis.

On 3rd December 2015, West Yorkshire Trading Standards were granted two forfeiture orders for the destruction of legal highs from headshops High Rollaz and Red Eye by Leeds Magistrates court.  The legal representative for Dr Hermans and Rudeboy objected and was to prepare an argument so the case was adjourned to a later date.

This week at Leeds Magistrates court the legal representative for Dr Hermans and Rudeboy no longer opposed the forfeiture orders. West Yorkshire Trading Standards were granted the remaining two forfeiture orders and full costs of £19,154.06 from all four headshops.

David Lodge, Head of West Yorkshire Trading Standards, said “The term legal highs is both incorrect and misleading. These drugs can have a devastating effect, whether you are a first-time or long-term user. All drugs are potentially dangerous and I hope the new law will convince society at large to take this issue seriously. Under the Psychoactive Substances Act 2016, selling carries a maximum prison sentence of seven years.This operation has been a success, with the removal of approximately £170,000 worth of dangerous products from the marketplace”.

Councillor Pauleen Grahame, Deputy Chair of the West Yorkshire Joint Services Committee which oversees the work of Trading Standards said “We are clear that these products, which fall into the same categories as classified drugs like synthetic cannabinoids, stimulants, depressants and hallucinogens, are being sold by irresponsible businesses in West Yorkshire to be smoked, snorted, swallowed or injected. They are misleadingly marketed as ‘research chemicals’ and labelled as ‘not for human consumption’, to try circumvent the legislation. The products forfeited for destruction today are dangerous and present a significant risk to people that might have used them”.

Councillor Mark Dobson, Leeds City Council’s executive board member with responsibility for Safer Leeds said: “We are working with a range of partners, including West Yorkshire Trading Standards and West Yorkshire Police to tackle and reduce the use of legal highs, and it is positive news that through the courts a first forfeiture order has been secured. We would urge anyone who is thinking of taking a legal high to think very carefully before doing so because of the potential harm they can cause to your health. Unfortunately there have been a number of incidents in West Yorkshire where young people have been taken seriously ill after use, which shows just how dangerous taking substances like these can be”.