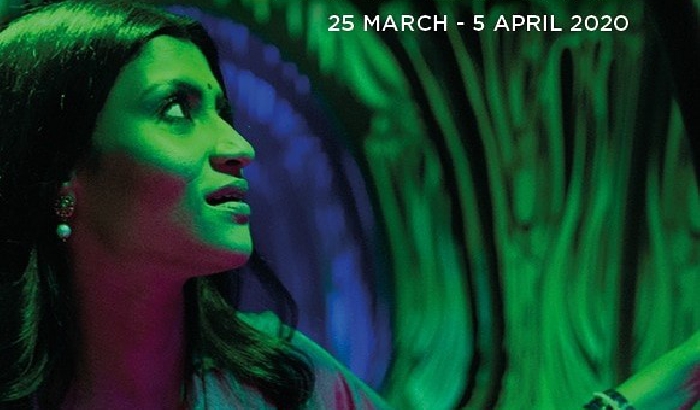 The curation will explore themes of migration, displacement and the reinvention of identity in a new environment through a curation of premieres; screenings and events that continue to celebrate the work of women in cinema. In today's desperate times, in which communities are being uprooted over nationality, ethnicity and religion globally, the festival programme will celebrate the commonalities of humankind, which are currently being forgotten.

UK Asian Film Festival, presented by Tongues on Fire, historically showcases South Asian feminist films and the work of pioneering female artists and auteurs.  The festival will run from 25th March – 5thApril 2020 in venues across London, Manchester, Leicester, Coventry, Glasgow and Stockton. UKAFF is supported by a BFI Audience Award, using funding from the National Lottery.

Set in a newly developing industrial area on the outskirts of New Delhi, Dolly Kitty And Those Twinkling Stars chronicles the quiet transgression of two female cousins who, through their complicated love-hate equation, enable each other to find freedom. The film integrates key issues within its narrative, from female empowerment, defying the patriarchy and interfaith relationships to challenging gender conformity and the trappings of capitalist society, where human beings are commodified and evaluated by app star-ratings.

Dolly Kitty And Those Twinkling Stars features two of India’s most prolific actresses, Bhumi Pednekar and Konkana Sen Sharma, in the titular roles. The film is produced by Shobha Kapoor, Ekta Kapoor’s Balaji Telefilms and distributed by Zee Studios International.

Alankrita Shrivastava is an award-winning feature film director and screenwriter from Mumbai with a penchant for telling women’s stories, exploring the interior world of women through her films. Dolly Kitty And Those Twinkling Stars is Alankrita’s third feature film as writer-director. Most recently, she has co-written and co-directed the critically acclaimed and hugely popular Amazon Prime Original series Made In Heaven (2019).

Alankrita’s second feature film as writer-director, Lipstick Under My Burkha, premiered at the Tokyo International Film Festival in 2016. It was banned in India for being too honest a portrayal of women and Alankrita had to fight a long battle to release it in India. It finally released theatrically in India in July 2017 to critical plaudit and commercial success.

The Closing Gala on Sunday 5th April, The Mayfair Hotel will present an In Conversation with Boney Kapoor. Acclaimed producer Boney Kapoor joins the festival to share an insight into his cinematic career and to launch the biography of his late wife, silver screen icon Sridevi, written by Satyarth Nayak.

Kapoor is highly regarded for producing commercial and critically acclaimed films. His cult classic, Mr India, is one of the 100 Greatest Indian Films of All Time at the Centenary of Indian Cinema. He has produced over 30 films including Mom starring his late wife, the legendary actress Sridevi, in her 300th film over a 50-year career span in the Indian film industry. The talk will be followed by the UK Asian Film Festival Awards presentation.

Screen legend and the historically-known ‘Dream Girl’ of Indian cinema, Hema Malini, will be In Conversation on Saturday 28th March, Courthouse Shoreditch following a screening of Shimla Mirchi (India, 2020). The film reunites Malini with veteran director Ramesh Sippy after her role in the most iconic Indian film of all time, Sippy’s cult classic Sholay. Shimla Mirchi also features two of contemporary Indian cinema’s finest, Rajkummar Rao and Rakul Preet, in the tale of an awkward young man who decides to write a love letter to his crush. The letter winds up in the hands of her mother, who mistakenly thinks she has a secret admirer.

The Closing Film will be the UK Premiere of Lihaaf (India, 2019, Dir: Rahat Kazmi) on Sunday 4th April, Regent Street Cinema followed by a Q&A with director Rahat Kazmi and the film team. Based on author Ismat Chugtai’s celebrated story of the same name, Lihaaf is a period drama that powerfully interweaves the book’s plot of a same sex relationship between Begum and her masseuse, and the trial that the author underwent after being charged with obscenity for publishing the story. Lihaaf explores the taboos against homosexuality and restrictions on freedom of speech that society grapples with to this day.

Directed by one of Pakistan’s most lauded auteurs whose previous credits include the iconic drama series Humsafar(2011) and feature film Manto (2015), Zindagi Tamasha tells the story of Rahat, a struggling cleric: he sings hymns to the Prophet, takes care of his bedridden wife and is considered a pillar of a conservative community. But he has a guilty pleasure – enjoying old Punjabi movies. At a wedding, edged on by friends, he breaks into a dance paying homage to his film idols. The video of a bearded man dancing effeminately goes viral and Rahat’s life unravels as he is shunned by friends and shamed by family.

The award-winning film has been caught up in a blasphemy controversy, with its theatrical release in Pakistan suspended while the federal government has referred it to the Council of Islamic Ideology, despite being cleared by the country’s censor board. Islamist political party, Tehreek-e-Labaik Pakistan, warns of unrest if the film releases due to what it perceives as the ‘blasphemous’ content of the film.

The Scotland Premiere of Axone (India, 2019, Dir: Nicholas Kharkongor) takes place on Friday 13th March, University of Glasgow; followed by screenings on Friday 27th March, Rich Mix; and Saturday 28th March, Arc Stockton Arts Centre. The film is a delightful comedy of errors that follows two friends who set out to make a special, North Eastern dish for their best friend’s wedding. What follows is a series of comic, culinary misadventures as they try to pull off a dramatic cookfest while clashing with their neighbours and landlords. A light-hearted take on cultural stereotypes, the film uses food to highlight society’s inherent bias and prejudice against minority communities.

The UK Premiere of The Illegal (USA, 2019, Dir: Danish Renzu) on Sunday 29th March Rich Mix; and Sunday 5th April, Phoenix Cinema Leicester is a powerful drama featuring Life Of Pi actor Suraj Sharma as a middle-class Delhi boy who gets into a prestigious LA film school where he learns of the hardships of immigrant life. Danish Renzu’s film provides an aching portrait of how, for some, following your dream is a privilege, which comes hand in hand with a struggle to survive. Screenings will be followed by a Q&A with director Danish Renzu.

Highlighting Autism Awareness Week, the World Premiere of Varnapatala (India, 2020, Dir: Chethan Mundadi) on Monday 30th March, Prince Charles Cinema depicts the challenges of a mother raising an autistic child. Nitya marries her longstanding boyfriend, Michael, later becoming a mother to an autistic child, Myna. Life becomes a series of challenges and Nitya inevitably leaves Michael as he struggles to prioritise the needs of his own child. Now a single parent, Nitya is forced to face the challenges alone. The screening is followed by a Q&A with producer Dr Saraswati Hosdurga.

The European Premiere of Kathaa@8 (Singapore, 2019, Dir: Shilpa Krishnan Shukla) on Saturday 4th April, Regent Street Cinema is an award-winning anthology of 8 stories in 8 different Indian languages – all happening at 8:00 pm. The films explore themes of love, loss and longing, of tears and fears, hopes and dreams. The stories are strewn across a town, a city, a country, all happening in the expanse of a few hours one night in Singapore. The screening will be followed by a Q&A with director Shilpa Krishnan Shukla.

Documentary highlights include the London Premiere of Because We Are Girls (Canada, 2019, Dir: Baljit Sangra) on Saturday 28th March, Rich Mix. This compelling documentary chronicles a conservative, Indo-Canadian family in small-town British Columbia, who must come to terms with a devastating secret: three sisters were sexually abused by an older relative beginning in their childhood years. After remaining silent for nearly two and a half decades, the sisters finally decide to come forward—not only to protect other young relatives, but to set an example for their own daughters. The screening will be followed by a Q&A with director Baljit Sangra and the sisters, Jeeti Pooni, Kira Pooni and Salakshana Pooni.

Lynch Nation (India, 2018, Dir’s: Ashfaque EJ, Shaheen Ahmed, Furqan Faridi, Vishu Sejwal), screening on Friday 27th March, Queen Mary University of London, is a timely, poignant documentary that explores heart-wrenching stories of the increasing mob lynching of Muslim and Dalit men and boys in India. The film documents several incidents of a horrific crime by traveling through the personal spaces of the victims and recording the testimonies of their families and survivors to understand the epidemic and its impact. The screening will be followed by a Q&A with assistant director Furqan Faridi.

Highlights of the festival’s Fashion in Cinema strand include Made In Bangladesh (Bangladesh, France, Denmark, Portugal, 2019, Dir: Rubaiyat Hossain) on Saturday 28th March. Rich Mix. In the busy city of Dhaka, Simu works gruelling hours at a textile factory, supporting her unemployed husband. After a fire kills a colleague, Simu is shaken into action, courageously making alliances and taking steps to speak out. A nuanced portrait of the pleasures, possibilities and limitations of collective liberation and female solidarity, set against the harsh backdrop of a sweatshop workplace.

Young Tongues – Short Film Competition will take place on Friday 27th March, BFI Stephen Street, where this year’s shortlisted competition films on the theme of Uprooted by young filmmakers will be screened and winner announced.

LGBTQ Short Film Showcase on Friday 3rd April, Regent Street Cinema is curated by Neeraj, a finance professional who is an avid believer in the power of cinema to bring about social transformation. Through his independent film production company, Lotus Visual Productions, he supports performance artists and filmmakers to create a discourse between ally and queer communities. His production company was recently presented with the “Queeros” award for its contribution to Indian queer cinema.

The Classic Gold screening of Pyaasa (India, 1957, Dir: Guru Dutt) on Saturday 4thApril, Regent Street Cinema will invoke the nostalgia of one of Indian cinema’s most beloved works of tragedy. Vijay (Guru Dutt) writes unpopular poems about the destitute and poor. Ridiculed by his brothers and scorned by publishers, Vijay finds encouragement in a sweet prostitute, Gulabo (Waheeda Rehman). When a homeless man wearing a coat Vijay gave him is killed, Gulabo convinces a publisher to print his poems, believing Vijay to be dead. The poems are wildly popular, thanks to the myth conjured around Vijay’s supposed death. When he reappears, he finds that few friends can be trusted. An enduring classic with memorable songs, dialogue and characters.

UK Asian Film Festival Founder and Director, Dr Pushpinder Chowdhry MBE says, “The films selected for UKAFF this year are based on the theme “Uprooted” to shine a light on the controversial, current issues affecting the South Asian community. We are igniting a discussion to challenge traditional taboos to plant a new vision for the future.I am delighted that we are extending our reach by launching in Coventry and Stockton alongside our touring programme to Glasgow, Leicester and Manchester.”

UK Asian Film Festival Creative Director, Samir Bhamra says, “We are in the 21st century and technology has connected us to the stories taking place in every corner of the world. So this year at UKAFF, we are championing films that talk about the sentiment of this time. These fantastic stories and events will ignite and enchant people from all communities with the energy of the human spirit as they challenge and uproot outdated ideals. Let's behave like we are in the 21st century by planting new ideas and celebrate our changing culture so that there is a ray of hope for the future.” 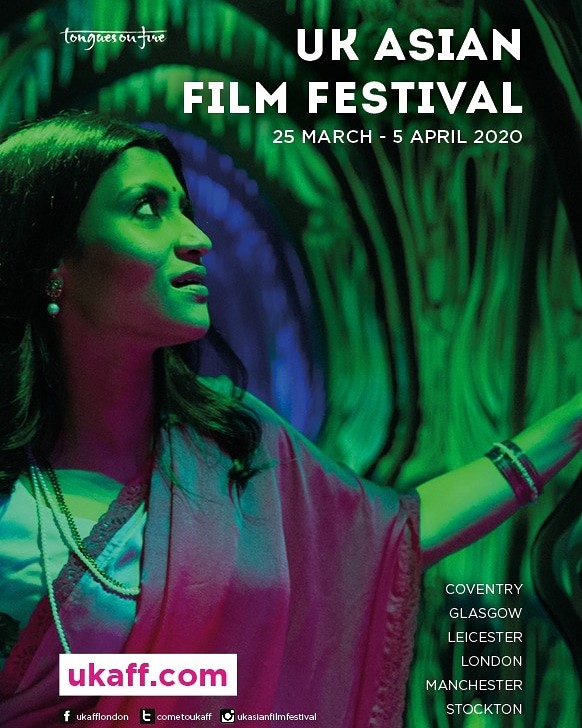