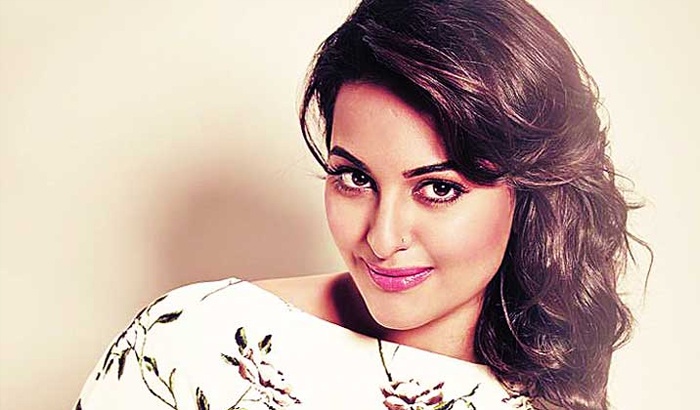 Sonakshi Sinha, says she is happy with her work in Bollywood and isn't seriously pursuing Hollywood dreams.

"I'm very content with the work I am doing here. But if something really interesting came my way, I would give it a thought -- just as I do to all my projects here. But I am definitely not chasing it," Sonakshi said in a statement. Ahead of the tour, which is going to Melbourne, Sydney in Australia and Auckland in New Zealand, Sonakshi has opened up on various facets about her career. A fan of "live performances", she said she is glad to be part of one of the biggest international tours of this year. Will audiences get to see her shake a leg with Salman? "We are working on the creative, so the audiences will have to come to the show to watch, but I assure you that if the "Dabangg" jodi is together again, it will be great," Sonakshi, who made her film debut with Salman starrer "Dabangg" in 2010, said in a statement.

A fan of yesteryear hits, Sonakshi said: "I'm up for performing to all the hits of the 1990s because that's what we've grown up listening to and I'm really happy that they are making a comeback. There is also a reprised version of 'Gulabi aankhen' in my upcoming film 'Noor', which is outstanding." As part of the tour, Sonakshi will also be joined by actor-filmmaker Prabhudheva, Bipasha Basu and rapper Baadshah. Sonakshi said she is planning a performance with Prabhudheva, with whom she has earlier grooved to the song "Go Go Govinda". "We are planning on doing something on our songs together. We have done many hit songs together and all I can say is the audience will love whatever they see," she said. She said she would also like to jam with Badshah, if given an opportunity. Having been part of blockbusters such as "Dabangg", "Rowdy Rathore" and "Holiday: A Soldier Is Never off Duty", she doesn't like to believe she has been lucky.

"All the films did well because they struck the right chord with the masses. It's the hard work of a great team transpiring on screen and I am happy to have been part of these blockbuster entertainers," she said, adding that her Indian looks and how she carries herself are the reasons why the masses have embraced her. "I keep it real and that is a quality that people appreciate. They always love someone who they can connect with. My first film was very mass-oriented so they connected with me instantly. I am very thankful to all of them for appreciating my work and giving me so much luck and support," she added.

Talking about her upcoming release "Noor", she said her role in the film is very close to her heart. "After 'Noor' you'll see me in an Ittefaq' remake, opposite Siddharth Malhotra. For the first time, I'm playing a grey character and audiences have never seen me play such a role before," she said.