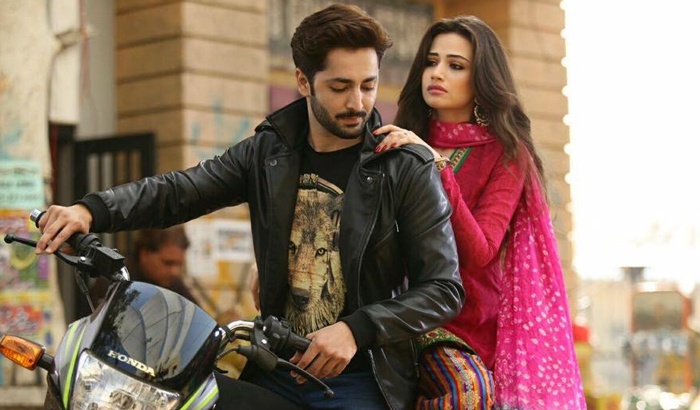 Danish Taimoor and Sana Javed work up quite a bit of chemistry on the quirky and hip poster of the upcoming film.

Not so long ago Yasir Nawaz announced his second feature film, Mehrunisa V Lub U, and guaranteed that it is going to be even more entertaining than his debut film, Wrong Number. Keep in mind that YNH Films' - a production house co-owned by Hassan Zia, Nida Yasir and Yasir Nawaz - debut film, which was being considered the underdog, gave tough competition to the star-studded Bin Roye in 2015 so this only means that Urdu1 Pictures might just have clinched yet another guaranteed blockbuster.

Urdu1 Pictures' film, Actor in Law, is doing good business in the local market and with Rs 24 crore in its kitty, it has recently entered the prestigious list of top five all-time highest grossing films in Pakistan. The channel recently unveiled the first look of Mehrunisa V Lub U at Fashion Pakistan Week Winter/Festive and we like the quirky (bordering towards desi) poster.

While Danish Taimoor looks all modern and savvy in a trench coat, Sana Javed channels her inner desi diva in a lehnga choli. We just wish they had worked on the fit of the choli and the zipper - on Javed's shirt - should have been photoshopped out of the sight because it hints towards a clumsily done job.

Yasir Nawaz, Nida Yasir, and Hassan Zia at FPW and they dished out some interesting deets about the film that is all set to release on Eid Ul Fitr in 2017.