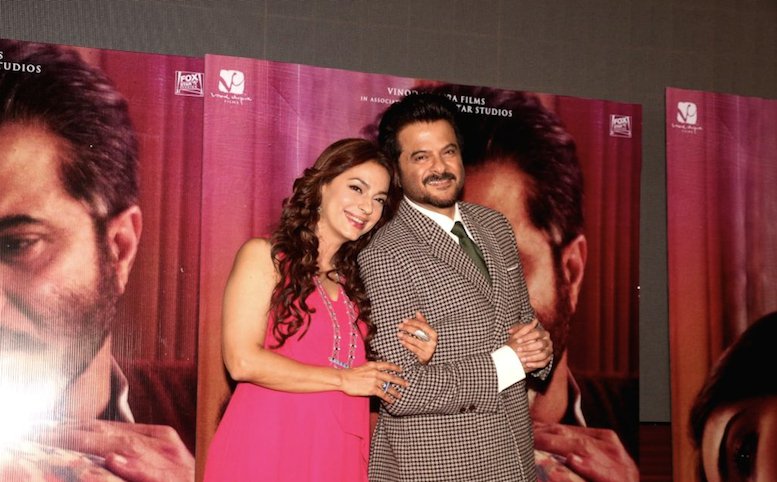 Q1: The last film you did a film with Anil Kapoor was in 2007. How does
i t feel to be working with him again?

It was absolutely wonderful. We have done a number of films earlier in my career
with him and our last was Salaam-E-Ishq. He has always been very committed and a
very hard-working person. He was then and he is today as well. I was familiar with
him and his style of working and he likes to rehearse and he likes to get the shot
right. It’s been an absolute pleasure to work with him and more so I think it was more
exciting working with him and Sonam together. I have seen her on our sets when she
was a very young teenager. In Deewana Mastana we had done a 30-day schedule in
Switzerland and Anilji brought his family along so they would visit us on set and hang
out. To be working with Sonam and Anilji was a double pleasure.

Q2: What was it about the story that made you take it up?

When I got the call from VCP Films, Vinod (Chopra) had been producing some of my
favourite films of recent times. Whether it was the Munna Bhai series, PK or 3 Idiots,
he has made fantastic films. So when you get a call from a producer like that you just
know that they’ve got something. Here is a story worth telling otherwise they would
not be telling it. I went to the office to meet the director, Shelly Chopra Dhar, she sat
me down and she read me the script. By the end I had enjoyed the whole script so
much that I was like “I'm definitely doing this”, because this is a script, which tells you
an unfamiliar story in a very familiar way. It’s full of surprises, full of friendship, family
bonding and values. It’s that lovely territory that you know, that you can identify with
completely. This film surprises you, it’s got fun, it’s got warmth, it’s got emotion and I
think it’s the most beautiful package. And I think you should see this film to know
what I’m saying.

Q3: What are the best memories you have from being on set for this
film?

My first day of shooting was in Mumbai and then after that we went off to Patiala to
shoot the home scenes as the whole film is set in North India in a small town. After
that we were shooting in Chandigarh. In Patiala it was winter, very cold and we had
night shoots. We were shooting in a big house and all of us would huddle up and
chat, passing time in between shots. It was real fun. In the daytime, even though we
shoot in the night, you can’t sleep the whole day, so in the afternoon I would go for a
walk. Anilji would be cycling, lifting weights, skipping rope in the garden with his
trainer. He really works hard at his fitness, works hard to look good, and works hard
on the sets. He's so much fun. I also found Sonam to be a warm chatty person. She
always wanted to know how things used to be when I used to shoot with Anilji earlier
and how we used to do things earlier. Very often she would be on the phone
browsing, looking for gifts for Sunitaji (her mother) and she would tell me what the
latest trends were and what’s going on. She was really fun and it was great working
with her. Sonam also told me how she had been an assistant to Sanjay Leela
Bhansaliji for about 2-3 years and that’s how she knew film making so well. I was
amazed at how much she knew about film making, editing, lenses and cameras and
shots and how it ought to be taken or should be taken. I was amazed at her, really
Sonam surprised me very pleasantly.

Q4: What can we expect from your character?

Let me put it this way, Vinod Chopra called me up for this film and when I returned
his call he said “Juhi when we wrote the film and I was writing this character, I
thought you were going to play this role. This role has either been written with you in
mind or once we’ve written it there is only you can play it the way it has been written”.
I was so thrilled; it’s a wonderful compliment to an actor. This role is warm, fun, cute,
and sensitive. It’s what a lot of people have seen me doing and have liked me doing
over the years

Q5: Out of all the actors who forgot their l ines the most?

In this film we’ve had a wonderful star cast. Actors who are really solid whether its
Rajkummar Rao, Anilji, Madhumaltiji who plays Anilji’s mother, Sonam Kapoor and a
host of other character artists, one better than the other who are either theatre artists,
each one was wonderful. So forgetting lines there is no chance. In fact a lot of them
have improvised on their role and made it even more believable and even more real
which have brought their characters alive. I am so happy, it’s a great feeling when
you have worked in a good film, your role is nice but even more than that the film is
fantastic. I think this is one of those films I will always be happy and proud about that
I was a part of this team.