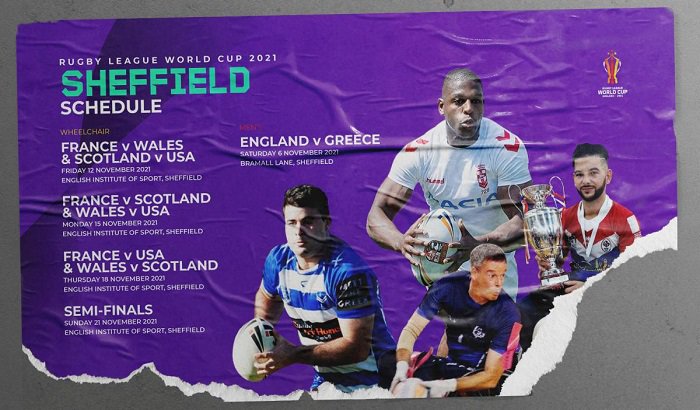 The Rugby League World Cup 2021 tournament organisers have revealed the much-anticipated fixture schedule for what promises to be the biggest and best World Cup in the history of the sport, as the men’s, women’s and wheelchair teams all compete at the same time in a major sporting first.

Sheffield will be hosting nine fixtures at RLWC2021, with the English Institute of Sport playing a key role in the wheelchair tournament.

The full fixture list for Sheffield is as follows:

In June, it was revealed that Sheffield will be the team training base for the men’s squad from Greece, and wheelchair sides from France, Wales, Scotland and USA.

Councillor Mary Lea, Cabinet Member for Culture, Sport & Leisure at Sheffield City Council, said: “We are absolutely thrilled to be hosting the only England men’s game in Yorkshire, against Greece who will enjoy their first experience of the tournament here in Sheffield. And, with games including current champions France, against third ranking Wales, the wheelchair group matches look set to be full of anticipation and tension.

“As well as being one of the most inclusive and diverse events ever hosted in England, the tournament is on course to be the biggest and most viewed Rugby League World Cup ever. The fixtures announced today, certainly support that here in Sheffield, where we expect enthusiastic crowds, inspiring moments and a long lasting legacy of Rugby League in the city.

“The pandemic has had a huge impact on sporting competition and I know that come Autumn 2021 we will all be ready to celebrate this tournament with excitement, and deliver our part in this world-class event with pride.”

Jon Dutton, RLWC2021 Chief Executive, said: “This is a huge moment for the tournament and for fans in our host cities and towns as we reveal the full fixture schedule.

“The tournament has been gaining momentum over recent months and fans can now look forward to being part of this unique global event. With match dates and locations confirmed, the excitement will only intensify.

“RLWC2021 will bring together the very best that the sport has to offer, and you can see from the schedule that there is no end of world class, not-to-be-missed matches, across all three tournaments.

“It Is an exciting day for all our Rugby League fans and communities across England who will be proud and brilliant hosts to the travelling nations as together we deliver the biggest and best Rugby League World Cup to date.”

England’s game against Greece, held at Sheffield United’s Bramall Lane stadium, will be the only England Men’s game in Yorkshire.

Stephen Bettis, CEO at Sheffield United, said: “We are honoured that our historic Bramall Lane stadium has been selected to host such a prestigious fixture. We are pleased to be able to work with Sheffield City Council to bring such an attractive game to the Steel City and hope Rugby League fans, plus those who may not yet have watched the sport live in Sheffield, come along and enjoy what will be a memorable occasion.”

Sheffield’s EIS will play a huge part in the wheelchair tournament, with 8 games in total, including the exciting semi final double-header.

“We have a proud history of supporting disability sports, and hosting the tournament is a great opportunity to showcase the excitement and raise the profile of Wheelchair Rugby.”