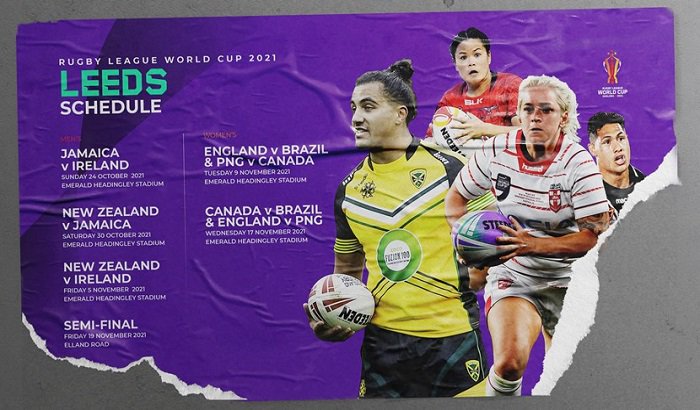 The Rugby League World Cup comes to England in 2021, and tournament organisers have revealed the much-anticipated fixture schedule for what promises to be the biggest and best World Cup in the history of the sport, as the men’s, women’s and wheelchair teams all compete at the same time in a major sporting first.

The full fixture list for Leeds is as follows:

Councillor Judith Blake, Leader of Leeds City Council, said:  “Leeds has a strong, world-class tradition as a sporting city; from hosting the World Triathlon annually to the UCI Road World Championships and the Cricket World Cup in 2019.

“We are now excited to have such a strong set of fixtures confirmed for us as one of the host cities for the Rugby League World Cup 2021. People across Leeds will be able to see the men’s teams from Ireland, Jamaica and New Zealand as well as the women’s teams from Brazil, Canada, England and Papua New Guinea play in our iconic Emerald Headingley Stadium and Elland Road.”

Kevin Sinfield MBE, Leeds Rhinos Director of Rugby, added: “We are delighted to be hosting seven games at Emerald Headingley Stadium, more than any other venue, at the Rugby League World Cup 2021. The tournament is going to be the biggest ever with men's, women's and wheelchair Rugby League all showcasing our sport at its very best.

"We are proud to be hosting two games featuring the New Zealand Kiwis, who have a long history of playing at Headingley, dating back to the first ever Test match in 1908. We look forward to welcoming Jamaica and Ireland to the city of Leeds and that first meeting promises to be a real ‘I was there’ moment in the 130-year history of our stadium. However, the fixture that really stands out is the opening day of the Women's Rugby League World Cup when England take on Brazil, I am sure it will be an unforgettable occasion. It is wonderful to be able to look forward to this fantastic event, especially during the tough times at present and I wish all the participating teams the very best in their preparation.”

Jon Dutton, RLWC2021 Chief Executive, said: “This is a huge moment for the tournament and for fans in our host cities and towns as we reveal the full fixture schedule.

"The tournament has been gaining momentum over recent months and fans can now look forward to being part of this unique global event. With match dates and locations confirmed, the excitement will only intensify.

"RLWC2021 will bring together the very best that the sport has to offer, and you can see from the schedule that there is no end of world class, not-to-be-missed matches, across all three tournaments."