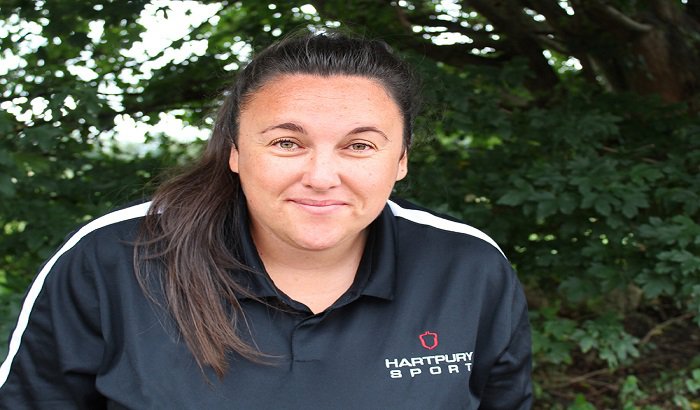 Stacey Miles, a full-time Football Association coach for nearly a decade, has been appointed as Women’s Football and Futsal Academy Manager at Hartpury to help develop the next generation of female footballers.

Students at Hartpury – the UK’s premier sport and education setting – will benefit from her extensive range of skills and knowledge gained as a full-time professional coach and in a number of other roles at the Football Association (FA).

Since 2013, Stacey has been employed by the FA as a Skills Coach and Skills Team Leader, as well as further enhancing her expertise as an Elite Coach Mentee.

In the 2018-19 season, Stacey gained international experience working with the England Women’s U18 team in her elite coach mentee role and as a technical coach with England National Performance Camps U14.

Stacey, who succeeds Aston Villa Women’s player Natalie Haigh as Women’s Football and Futsal Academy Manager at Hartpury, is just about to complete her UEFA A License and in addition is a qualified Level 3 UEFA B goalkeeping coach and an FA Affiliate Tutor Level 1 and 2 in Gloucestershire.

Stacey said: “I’m thrilled to have been appointed as Women’s Football and Futsal Academy Manager and looking forward to building upon the success it’s enjoyed under Natalie Haigh in recent years.

“It’s a tremendous opportunity for me to apply the skills and knowledge that I’ve gained with the FA to fully support our students to develop as footballers and futsal players.

“Hartpury has a fantastic track record in developing players across a wide range of sports, as well as supporting them in their studies, and I’m relishing the chance to play my part in ensuring that success story continues.”

Hartpury, which has strong links with FA Women’s Super League and National Premier League teams, is committed to supporting the FA’s efforts to expand women’s football and futsal.

For the fourth year in a row, Hartpury was recently announced as one of 12 colleges to host the Football Association’s Women’s Football Apprentice – part of the FA’s women’s football strategy, ‘The Gameplan for Growth.

Since 2017, Hartpury has encouraged more than 400 girls and young women to take their initial steps into football and worked with 11 primary schools within the local area, through the apprentice scheme.

Paul Tassell, Football Academy Manager at Hartpury, said: “We are looking forward to Stacey continuing the growth and success the women’s programme.

“We have made great strides in a short space of time and we are consistently competing with the leading programmes in the country.

“Stacey has a strong background with great insight at international level which will benefit all involved in the programme.”

Hartpury has been officially accredited by the Talented Athlete Scholarship Scheme (TASS) for leading the way in how it supports talented athletes in education in England.

As well as top-level coaching and exceptional sports facilities, students at Hartpury have access to performance services that can include physiotherapy, sports psychology, nutrition advice, lifestyle support, and strength and conditioning.

Its new £8.8 million Sports Academy includes a biomechanics laboratory, a rehabilitation suite featuring an anti-gravity treadmill, and a human performance laboratory with an altitude chamber and sports hall.